Firefighters extinguish a fire on the 12th floor of Plus Condominium Hat Yai 2 in Hat Yai district, Songkhla, on Tuesday. (Photos by Assawin Pakkawan)

SONGKHLA: A washing machine sparked a blaze in a 27-storey condominium building in the centre of Hat Yai district on Tuesday.

Local police were informed of the fire at Plus Condominium Hat Yai 2 at Saphan Dam intersection at about 4pm.

Responders found fire consuming Room No. 255/1230 on the 12th floor. Flames had spread from the washing machine to two air-conditioner condensers on the balcony, fire alarms were sounding and panicked residents were rushing out of the building.

Fire engines from several areas of Hat Yai were mobilised. Firefighters broke into the empty room and put out the flames in about 15 minutes. No one was injured.

The washing machine and the condensers were damaged, and a wall and the ceiling above the balcony were charred. Sprinklers inside the room had been activated and prevented the fire from spreading further.

Police said the room's occupant had started the washing machine and then left the condominium. A short circuit is believed to have started the fire. 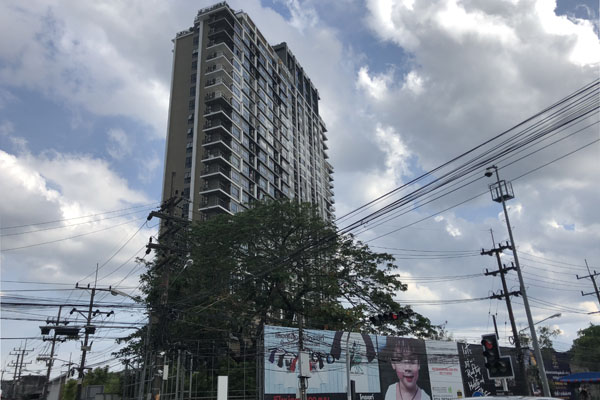 An exterior shot of Plus Condominium Hat Yai 2, where a fire broke out on Tuesday.