KANCHANABURI: Tycoon Premchai Karnasuta and his three camping companions all entered pleas of not guilty in the Thong Pha Phum court on Wednesday to charges of poaching in Thungyai Naresuan Wildlife Sanctuary.

The next hearing was set for May 21.

After a four-hour hearing the deputy prosecutor of Thong Pha Phum, Krisada Chuto, said the four defendants denied all charges after they were read to them. The court then adjourned the case until May 21.

The court released the four on bail and prohibited them from leaving the country without permission. It increased bail for Mr Premchai, Mr Yong and Mr Thanee to 400,000 baht each and maintained bail for Mrs Nathee at 150,000 baht.

He also said he did not expect the case to have any impact on his giant construction company, Italian-Thai Development Plc.

Mr Yong faced the same six charges plus an additional charge of colluding to possess firearms and ammunition without permission.

Mr Thanee faced the same seven charges as Mr Yong plus one more - intent to illegally hunt wildlife in a sanctuary.

Mrs Nathee, who served as cook during the trip, faces similar charges to Mr Yong, with the exception of colluding to illegally hunt wildlife in a wildlife sanctuary and conspiring to hunt protected wildlife.

The 63-year-old construction tycoon and the three others were arrested on the night of Feb 4 for allegedly hunting animals in Thungyai Naresuan Wildlife Sanctuary, a Unesco World Heritage site, in Kanchanaburi province. They were found in possession of the carcasses of protected animals, including a rare black leopard and its pelt. A pot of soup was found to contain meat from the leopard. 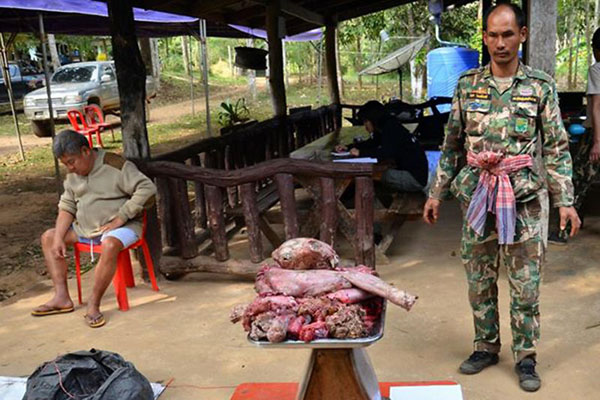