Chinese national Xu Xueliang, 32, is interrogated over the in-flight theft of cash from another passenger after being arrested at Suvarnabhumi airport on arrival from Hong Kong on Wednesday evening. Cabin crew said he was found holding the money, wrapped in tissue paper (inset), in his right hand. (Photo by Sutthiwit Chayutworakan)

SAMUT PRAKAN: A Chinese man was arrested on arrival at Suvarnabhumi airport on Wednesday evening for stealing cash from a Hong Kong passenger during the flight to Bangkok.

They also seized money, in both Thai and Hong Kong currencies, that he had allegedly stolen from another passenger.

The arrest came after tourist police at the airport were alerted by airline staff around 2pm on Wednesday that there had been an in-flight theft.

After the airliner landed, police moved in to investigate. They questioned Fai Kwok Ng, a Hong Kong national, who had reported to cabin crew that his money had been stolen.

The Hong Kong man alleged that Mr Xu stole the money, which had been in his carry-on bag.

Cabin crew had found Mr Xu holding 4,210 baht and 1,710 Hong Kong dollars wrapped in tissue paper in his right hand. The suspect was asked to return the stolen money to the Hong Kong passenger, which he did, Pol Maj Gen Surachate said.

Police also found many US one-dollar banknotes in his possession, raising suspicions it was not the first time he had stolen money during a flight.

Police suspect he put one-dollar bills inside victims' bags after stealing their money, so they did not immediately become aware of the theft.

A passport check found that Mr Xu often travelled on flights carrying transit passengers, as this would make it easier to avoid being caught after committing a crime, said Pol Maj Gen Surachate.

The suspect was handed over to Suvarnabhumi airport police station on a charge of in-flight theft. 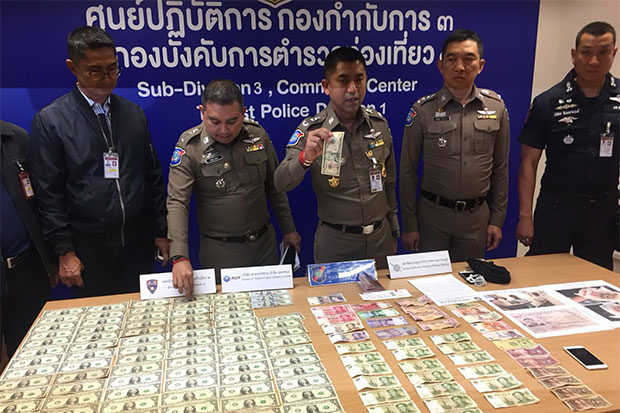 Tourist Police Bureau deputy chief Pol Maj Gen Surachate Hakparn shows the stolen money, along with many US one-dollar notes seized from a Chinese man caught stealing money from another passenger during a flight from Hong Kong to Bangkok. Police believe the suspect, Xu Xueliang, was in the habit of switching the small denomination US notes for currency he stole from passengers' carry-on bags during flights. (Photo by Sutthiwit Chayutworakan)