Prime Minister's Office Minister Suvaphan Tanyuvardhana talks to the press after meeting with local leaders about the controversial housing project on the foot of Doi Suthep, at Government Complex in Chiang Mai on Sunday. (Photo by Cheewin Sattha)

The government agreed on Sunday to end the controversial housing project in the foothills of Doi Suthep by returning the area to the park.

Prime Minister's Office Minister Suvaphan Tanyuvardhana said after a meeting with local leaders at Government Complex in Chiang Mai they had reached an agreement on the future of the housing project built for the Administrative Office of Appeal Region 5 in Mae Rim district.

The area where 45 houses and nine condominiums are being built will no longer be zoned for residential use, he said, adding that the plot will eventually be returned to its original owner, Doi Suthep-Pui National Park.

"The area will not be used for housing," he said.

Reforestation will soon be carried out in the area, and a clear boundary drawn to separate the plot to be returned to the park from the area allowed to be used for the regional appeal court, according to Mr Suraphan.

The area to be used by the court comprises two office buildings and three flats.

The entire compound is located on 147 rai of land controlled by the Treasury Department. It was originally part of the park, but was transferred to the Royal Thai Army after it was declared to be degraded forest. The army later handed the land over to the Treasury Department for its one-billion-baht project. 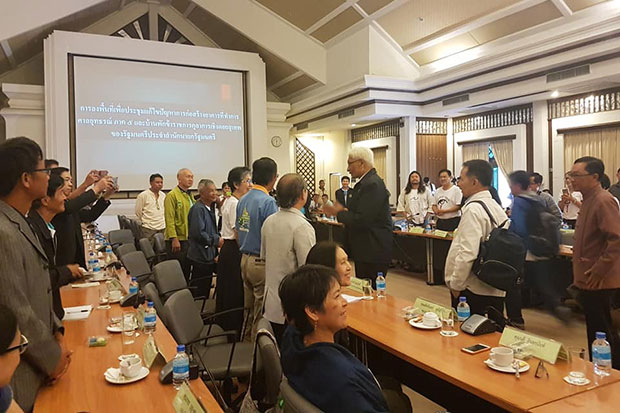 Attention is now focused on the future of the 45 houses and nine condominiums.

While the government waits for the completion of the buildings, a committee comprising government representatives and local leaders will be formed to decide what to do with the houses and flats in question.

The minister called for patience from local people on the fate of the housing project. "We have to find a solution step by step," he said.

Prime Minister Prayut Chan-o-cha set the tone for the meeting when he said on his weekly TV address on Friday that he would not allow anyone to live in the controversy-plagued area.

The meeting in Chiang Mai on Sunday took only about one hour and was said to have proceeded smoothly.

"I am impressed with the cooperation from representatives of the civic groups," Mr Suraphan said.

The network campaigning against the project said it was satisfied with the meeting, even though the government stopped short of agreeing to demolish the housing, and vowed to achieve the ultimate goal of seeing the area returned to the park.