Premchai Karnasuta, president of Italian-Thai Development Plc, speaks briefly to reporters as he leaves the Criminal Court in Bangkok on Monday. (Photos by Pornprom Satrabhaya)

Embattled construction tycoon Premchai Karnasuta, his wife and an associate pleaded not guilty to possession of two pairs of African elephant tusks, at the Criminal Court on Monday.

Mr Premchai, 64, his wife Khanitta, 64, and Wandee Somphum, 71, arrived at the court in the morning to lodge the plea in connection with the ivory tusks -- about a metre long and worth millions of baht -- seized from his residence in Bangkok in February.

They did not have to seek additional bail because they were previously granted bail of 300,000 baht each during an earlier court process.

Public prosecutors pressed charges against the three on April 11. They were charged with unauthorised possession of carcasses of protected wildlife, smuggling and concealment of the smuggled objects.

The three were at the court for about two hours. Afterwards Mr Premchai told reporters that he denied all charges, and that the court set a witness hearing for June 25. He also said that he was worried about the outcome of the case.

The tusk case followed authorities' search of Mr Premchai house on Soi Sun Wichai 3 in Huai Khwang district, Bangkok, on Feb 7, where they discovered the tusks along with 43 guns and ammunition.

During a police interrogation, the three defendants said Mrs Khanitta had inherited the legally acquired tusks in 1987 and that she and Miss Wandee reported the possession to the Department of National Park, Wildlife and Plant Conservation on April 15, 2015.

Mrs Khanitta said the tusks came from domestic elephants and Ms Wandee signed a document of assertion to that effect.

However, genetic testing found the ivory came from an African species, which cannot be registered under Thai law.

Mr Premchai and three others were first arrested on the night of Feb 4 for allegedly hunting animals in Thungyai Naresuan Wildlife Sanctuary, a Unesco World Heritage site, in Kanchanaburi province. They were found in possession of the carcasses of protected animals, including a rare black leopard and its pelt.

The arrest led to numerous charges against Mr Premchai, president of Italian-Thai Development Plc, concerning poaching and the possession of firearms and the tusks. 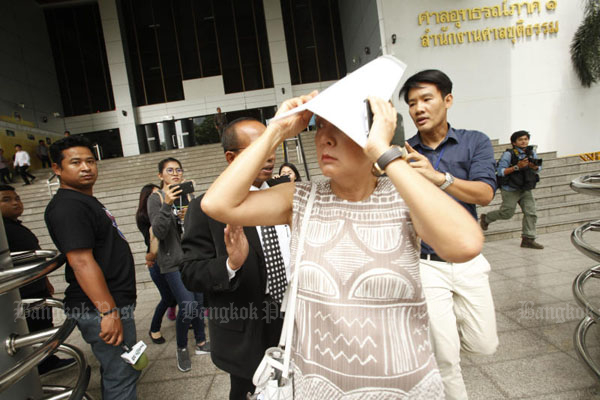 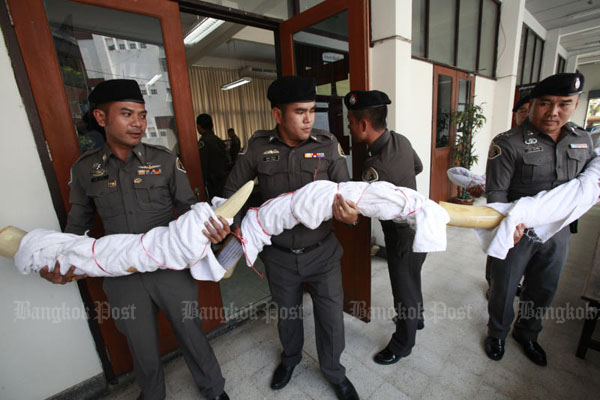 Police display the ivory tusks seized from Mr Premchai's residence, at the Natural Resources and Environmental Crime Division in Bangkok in March.