Coal-fired plants back on agenda
Business

Coal-fired plants back on agenda

Consideration of two coal-fired power plants in two southern provinces is back on track after a four-year delay, say energy policymakers. 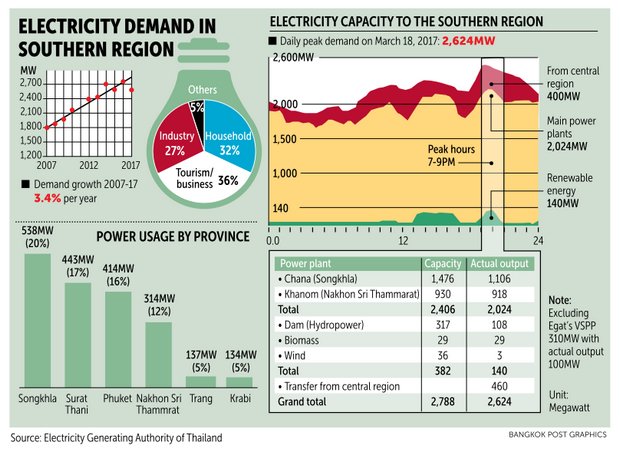 The plan for the two plants was postponed several times during 2014-17.

The Energy Ministry made the announcement Tuesday after setting up a committee of several analysts from the environmental, community impact, economic profit and project viability fields to study the issue.

Nantika Thangsuphanich, the ministry's deputy permanent secretary, said the committee will conduct a feasibility study for the strategic environmental assessment (SEA) report, for which a memorandum of understanding was signed by Energy Minister Siri Jirapongphan on March 30.

Ms Nantika said the SEA study costs 50 million baht and is expected to take roughly five months to complete before being submitted to policymakers, who will then make a final decision.

"The study will help determine whether the South should have more coal-fired power plants," she said. "If the answer is no, then policymakers will draw up a Plan B of alternative resources or power supply systems to generate electricity for the region."

Danucha Pichayanan, deputy secretary-general of the National Economic and Social Development Board, said the SEA study will consist of experts in the fields of energy, transport, tourism, the environment, fisheries, marine science, hydrography, public health, city planning, engineering and law.

All expert positions are expected to be filled within a month, after which the study will begin.

Manoon Siriwan, an energy analyst, said the study should be open to community input.

Currently, there are two natural-gas power plants in the southern region -- Chana in Songkhla and Khanom in Nakhon Sri Thammarat -- with a capacity of 2,406 megawatts.

There are also renewable power plants -- hydro, biomass and wind -- with a combined capacity of 382MW.

The two coal-fired power plants have been envisioned since 2014 under the national power development plan for 2015-36. The facilities were targeted to be developed and operated by the Electricity Generating Authority of Thailand (Egat).

The 800MW plant, to be located in Krabi, was initially scheduled to begin commercial operations in 2019. The 2000MW plant, to be situated in Thepha district, Songkhla, was targeted to launch some time in 2021-22.

The government had planned to invest more than 160 billion baht in the two plants.

A source at Egat said policymakers have failed to diversify fuel resources for the power generation system.

Thailand has relied heavily on natural gas, representing 56% of the country's power mix, and policymakers aim to shift to coal, accounting for 19%, to enhance the country's energy security over the next two decades.

The PDP was drafted in repose to concerns over ageing gas resources in the Gulf of Thailand and Myanmar's Martaban Sea, where gas supply has frequently been disrupted. Policymakers are concerned with the high cost of importing liquefied natural gas, saying it will raise consumers' power bills.

The Egat source said the diversification efforts got under way in 1992, when Gulf Power Generation Co and Union Power development Co were awarded licences to develop coal-fired power plants.

Those projects were delayed several times and were ultimately scrapped during 2002-03.