If anyone asks why tourists are banned from overnight stays in Similan National Park, just refer them to the photo above - a typical morning at Moo Koh Similan Marine National Park. (Video cap via Thai PBS)

Tourists will be banned from overnight stays on the pristine Similan Island in the Moo Koh Similan National Park in Phangnga province to protect marine resources. 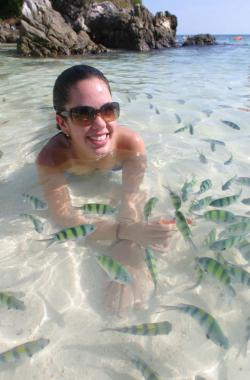 A tourist swims with fish in crystal clear waters near Similan National Park in Phangnga province, which is banning overnight stays.

The famous island will be available for day trips only. The policy will make it easier for authorities to protect natural resources, said Thon Thamrongnawasawat, a marine ecologist and chairman of the government's committee to draft a national master plan for marine resources management.

"The Moo Koh Similan National Park now sees an overwhelming number of visitors … the day-trip only option comes as a concrete step to cope with the problem," said Mr Thon, deputy dean of Kasetsart University's Faculty of Fisheries.

"They may trek, swim, dive but will have to leave at the end of the day," he added.

The ban on overnight stays will start in October, when the marine park is officially open to tourists. The park was closed earlier this month.

Similan Island is the only one of nine islands in the national park that provides bungalows and camping grounds for visitors.

The overnight stay facilities were operated by the state.

The department has already dismantled most of the bungalows and camping facilities, according to department director Songtam Suksawang.

"The cost-effectiveness of the repair of those houses is one factor, while concerns over the impact of wastewater from houses on the park's environment is a more important factor leading to the decision to remove all those houses, he said.

Similan Island, he said, was not suitable for overnight stays given a lack of fresh water and limited space, unlike larger islands such as in Tarutao National Park in Satun that are large enough to accommodate visitors, he said.

A boat ride to Similan is approximately one hour, so it isn't necessary for anyone to spend the night at the park, he said.

The ban on overnight stays would also help cut an unnecessary workload on the park's staff, he said.

The department is conducting an alternative tourism policy, he said.