PATTAYA: A police sergeant accused of taking a 20,000-baht bribe from a young woman to help write off her case and sexually harassing her has been dismissed pending an investigation into three serious charges.

The investigation found the allegations had grounds. The accused officer was a police senior sergeant major, who also admitted to the allegations to an extent, said Pol Col Apichai.

Authorities will also set up a committee to investigate three other Pattaya policemen working on that day to find out whether they were involved. If so, they would face drastic action said Pol Col Apichai.

Ancharee Yaekjaturas, 23, of Chaiyaphum told Pattaya reporters late Thursday night that she had been charged with drink driving after a motorcycle crash on Pattaya Soi Song Road early on the morning of May 28.

After she was put in a cell at the Pattaya city police station, a man dressed like a policeman approached and offered to help clear her charges if she paid him 20,000 baht. The woman agreed but the man later sexually harassed her. She claimed he hugged and kissed her on the cheek twice in full view of many people.

Deputy national police chief Pol Gen Veerachai Songmetra was scheduled to go to Pattaya this evening to interrogate the woman. 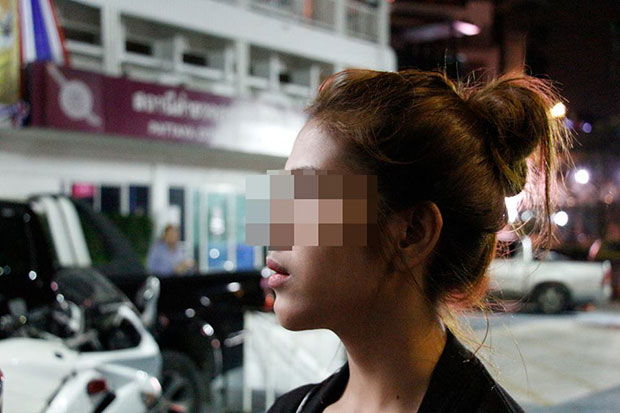 A 23-year-old woman talks to reporters in Pattaya about what happened to her on May 28. (Photo by Chaiyot Pupattanapong)

The youngest brother of the prime suspect in the macau888 gambling case, an immigration inspector, is released from detention after taking unapproved leave to accompany the fugitive to Hong Kong.