Marine experts and local volunteers worked to keep the whale alive, forcing it to regurgitate five large plastic bags, but 80 more were found in his stomach and intestines after it died.

SONGKHLA: A male short-finned pilot whale found stranded in Chana district of this southern province on May 28 has died, with a large quantity of plastic trash found in its stomach.

The whale, which measured 4.5 metres in length and 2.3m in circumference at its fins, and weighed about 500 kilogrammes, was found beached at the mouth of Khlong Nathap canal in tambon Nathap on May 28. It was close to death.

Officials of the Songkhla-based Marine Resources Research and Development Centre said a team of veterinarians tried for five days to save the life of the whale. It eventually died on June 1.

When the body of the whale was cut open for examination, the veterinarians found 80 pieces of plastic garbage, altogether weighing about 8 kilogrammes, in its stomach. It was believed the plastic garbage was one of the causes of the whale's death. 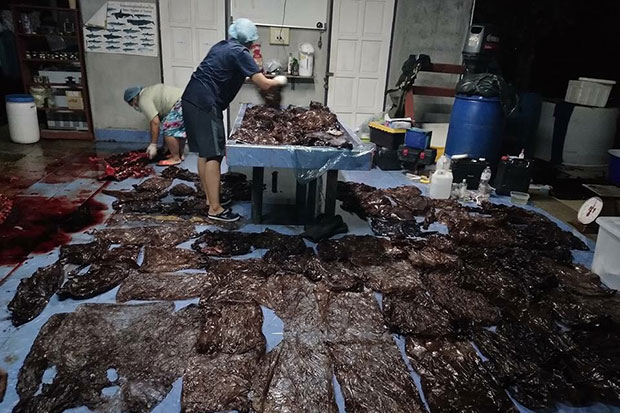