Bangkok-based Empower Foundation has been promoting freedom of choice for sex workers since the 1980s. (File photo via Empower)

Crackdowns on human trafficking are welcomed but stings on sex workers should be made illegal because they violate human rights, sex work advocates say.

In such operations, police usually pose as prospective clients in efforts to stamp out human trafficking rings.

The sex workers are also arrested and subject to excessive detention and questioning, activists from Empower Foundation said.

Speaking at a workshop on anti-human trafficking policy, the foundation's representatives insisted sex sting operations should be considered entrapment as they make use of "dishonest" evidence.

Thanta Laovilawanyakul, one of the organisation's representatives, said that despite the enforcement of the 2008 law on prevention and suppression of prostitution, more than 300 sex workers are arrested yearly.

There are an estimated 300,000 sex workers working in Thailand, and not all are victims of human trafficking. 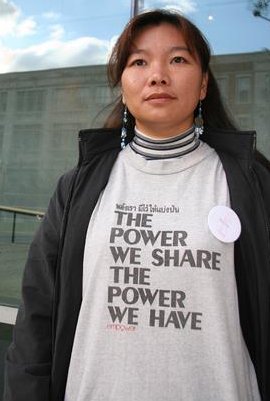 Thanta: Many 'victims of human trafficking' are actually breadwinners. (FB/thanta.laovilawanyakul)

She said it is time for the government to stop entrapping women and instead introduce a policy that would prevent the exploitation of sex workers.

"The budget for anti-human trafficking campaigns has risen to 3 billion baht from 9 million baht, but sting operations remain firmly in place [over the past 10 years]. It isn't a legitimate approach to deal with the issue as much as it is a violation of sex workers' rights," Ms Thanta told the workshop ahead of Anti-Human Trafficking Day on June 5.

Mai Janta, another representative from the foundation, said migrant teens see prostitution as a job to support their families.

Some of them end up being branded as victims of human trafficking and sent to rehabilitation programmes for up to eight months.

"In many cases those who get arrested are the breadwinners. Many of these women provide full cooperation to authorities yet they are declared persona non grata," she said.

"This is what they asked me to tell you," she added.

Pol Lt Col Kritthat Uamson, deputy director of the Department of Special Investigation's anti-human trafficking division, said authorities have to comply with the laws regarding prostitution or they would be considered negligent in their duty.

He said registering sex workers may be an option, citing cases of women who had voluntarily entered the profession.

Angkhana Neelapaijit, a National Human Rights Commission member, praised government efforts to address human trafficking but urged it to do more to address the rights of sex workers.