Protesters from 686 civil society groups donned blackface and ate veggies at Government House while demanding bans on two farm chemicals and better regulation of a third. (Photo by Apichit Jinakul)

About 150 representatives from 686 civic groups held a rally at Government House to demand Prime Minister Prayut Chan-o-cha ban two controversial pesticides, and limit the use of a third, by the end of the year.

The protesters say that paraquat and chlorpyrifos have been shown to harm the environment and people's health. They also urged the government to strictly monitor the use of glyphosate.

The Hazardous Substance Committee last month voted to allow the continued use of the three chemical pesticides under tightened regulations. However, the decision came under fierce criticism from social activists.

Gen Prayut said the government is examining ways to reduce the use of the toxic pesticides, the imports of the chemical substances and the farming areas where they are deployed.

In the morning, the premier sent Agriculture and Cooperatives Minister Grisada Boonrach to receive the petition from representatives of the civic groups calling themselves a network devoted to the banning of dangerous pesticides and chemicals. 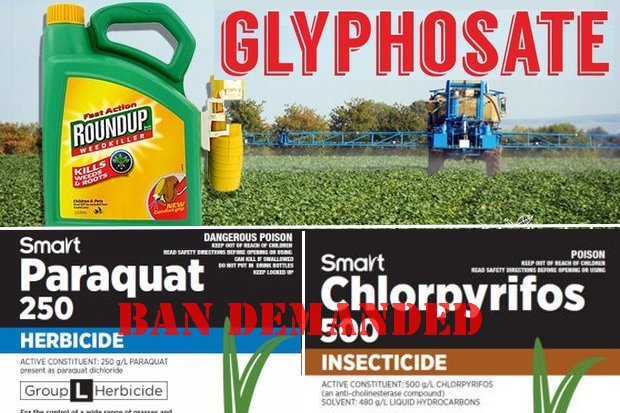 Various agencies including the United Nations have also urged all countries to prohibit and ban imports of paraquat and chlorpyrifos in order to prevent environmental degradation, the network said in their petition.

The first demand from the petition was to ban paraquat and chlorpyrifos by December 2019, a deadline advised by the Ministry of Public Health.

They urged the government to revise the Ministry of Agriculture and Cooperatives to listen to experts such as the Ministry of Public Health, research institutes and the National Legislative Assembly and also to act in accordance with the Dangerous Chemicals Act of 1992.

The network also demanded the Ministry of Agriculture and Cooperatives find alternatives, highlighting that up to 63% of farms yielding Thailand's main agriculture products such as rice, sugarcane and palm oil did not rely on paraquat at all.

Some representatives who attended the meeting in front of Government House did not understand why carbofuran, another toxic pesticide, was long ago banned by the Ministry of Agriculture and Cooperatives when paraquat is believed to be 42 times more dangerous.

The Thailand Pesticide Alert Network also revealed that studies have that around 50% of fruit and vegetables sold nationwide were found to contain traces of paraquat.

HONG KONG: Hong Kong's largest national security trial opened Monday with dozens of pro-democracy figures accused of trying to topple the government in a case critics say reflects the criminalisation of dissent in the Chinese territory.

The Move Forward Party (MFP) vowed to take the "Three Por Generals" out of politics and rewrite the constitution during an election campaign event in the North over the weekend.