Rolls Royce admitted in January of last year that it had bribed Thai government officials in the 1980s and 1990s so they would buy aircraft engines from the British firm for Thai Airways International.

Thai Airways International Pcl (THAI) will undertake maintenance and repair of Rolls-Royce Trent engines and expects additional revenue of up to 5 billion baht in 2020 from the business, the carrier said on Thursday.

The press release announcing the new tie-up made no mention of the scandal revealed two years ago showing that Thai government officials had received Rolls Royce bribes to buy the firm's engines.

The government has taken no action and the National Anti-Corruption Commission (NACC) has been silent on the revelation. Rolls Royce admitted corruption that took place in the 1980s and 1990s, but has not named any recipients of its bribery.

Chris Cholerton, president of civil aerospace for Rolls-Royce, said the new facility will not only serve modern Rolls-Royce engines, but also open the door to provide services to other carriers.

The airline now has become an authorised maintenance centre for Rolls-Royce and will spend 1 billion baht in 2018-2019 to expand its maintenance, repair and overhaul (MRO) facility at the Don Mueang airport.

Rolls-Royce will transfer knowledge and provide training for Thai technicians as well as work to attract customers to the new centre.

Additional investment will be finalised before the first phase concludes, while further collaboration could come in the form of a joint venture.

The initial facility will have the capacity to repair more than 30 Rolls-Royce Trent engines each year once operational, executive vice president of Thai Airways' technical department, Surachai Piencharoensak, told reporters.

Thai Airways could expand maintenance and repair capacity of Trent 700 and Trent 1000 engines to meet regional demand and could develop a joint business together, acting President Usanee Sangsingkea said in a statement.

"THAI will be able to optimise the use of the centre and promote joint business opportunities, generating income from customers outside of Thailand and creating returns that benefit the entire company," said Mrs Usanee.

She said for more than 35 years, THAI has continually developed its technical capabilities in different areas, including personnel training to expand their knowledge and skills, while the company has employed high technology to accommodate new types of aircraft engines. 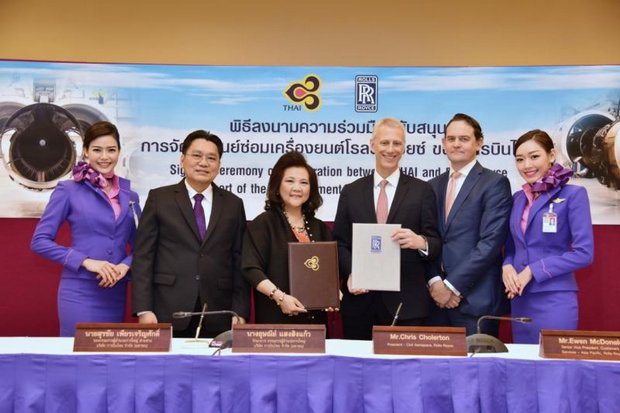 Some 30 engines are expected to be serviced in the first year, followed by 70-80 engines annually in the following three years.

Rolls-Royce forecasts global air travel to expand by 7% this year — 1.5% higher than the 20-year average.

Most of the growth is set to come from Asia-Pacific, with traffic forecast to rise by 9.5%.

"Asia-Pacific already has the highest passenger levels in the world, and that's why we are working together on this opportunity," said Mr Cholerton.

SAMUT PRAKAN: A reclusive German monk was found dead in a house at Wat Asokaram in Muang district on Tuesday afternoon, police said.