Police and forensic officers on Friday inspect the scene of the fatal shooting of four gold panners at a rubber plantation in Sukhirin district, Narathiwat on Thursday night. (Photo by Waedao Harai)

Pol Maj Gen Manas Siksamat, police chief of Narathiwat province, said the victims were planning for gold in a river running through a rubber plantation.

They were identified as  Muyaso Bado, 49, of Sukhirin district; his two sons Hilmee Bado, 23,  and Muhamad Hadis Bado, 16; and his son-in-law Marosatee Por, 36.  Their bodies were riddled with M16 bullets.

They were were found by Pongthorn Yakor, a friend of Muyaso.  The man was asked by the victims' worries relatives to look for them on Thursday night as they had not returned home after going looking for gold, Pol Col  Chaiwat said.

Relatives went to Sukhirin Hospital on Friday to take the bodies for burial.

They had been shot by "war weapons", Pol Maj Gen Manus said, using a phrase that covers the assault rifles commonly used by militants and security services in the area.

"We don't yet know the exact motive, but they may have been shot by hardline militants... or by a rival group of gold panners," he said.

He ruled out the involvement of local Buddhists, saying they were too afraid to venture deep into the forest in the mountainous border zone.

Police said they are investigating whether the violence stemmed from a personal conflict or was connected to the insurgency.

The area is a transit point for drugs and other contraband to and from Malaysia and provides a hideout for shadowy rebels and crime gangs.

Gold panning is not a major business in the South but flecks of the precious metal appear during heavy rains in some remote streams, providing a small bonus for the area's rubber tappers and farmers.

The three southernmost provinces of Narathiwat, Yala and Pattani have been plagued by a Muslim separatist insurgency that has claimed the lives of over 6,500 people since the violence escalated in 2004.

The majority of the victims have been civilians, including Muslim and Buddhist villagers, teachers and state officials, caught up in tit-for-tat violence between the rebels and security forces. 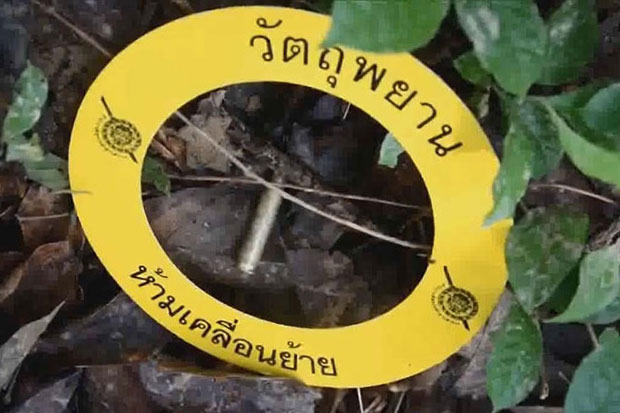 One of the 18 spent cartridge cases from an M16 assault rifle found at the scene of the attack.(Photo by Waedao Harai) The river where the four victims were attacked and killed while on a gold panning trip  in Sukhirin district, Narathiwat. (Photo by Waedao Harai)