Karen villagers come to the Supreme Administrative Court in Bangkok on Tuesday. (Photo by Tawatchai Kemgumnerd)

The Supreme Administrative Court has ordered authorities to pay 45,000-50,000 baht in damages to each of the six Karen villagers whose houses in Kaeng Krachan National Park were burned down seven years ago. 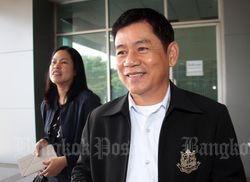 Chaiwat Limlikhitaksorn, former chief of Kaeng Krachan National Park who led officials to burn down the houses of Karen People in 2011, comes to the court on Tuesday. (Photo by Tawatchai Kemgumnerd)

The damages were five times what the lower court ordered the Department of National Parks, Wildlife and Plant Conservation to pay in 2016.

The top court, however, said it could not allow the villagers to return to live in the area because they did not have official land claims.

The villagers include the centenarian Karen spiritual leader, Ko-ee Mimee, of tambon Huay Mae Preang of Phetchaburi’s Kang Krachan district. They had been living in the area before it was declared part of the national park.

In 2011, the department burned down 90 homes and rice barns in a bid to evict the villagers from the park for alleged encroachment.

According to the court’s order on Tuesday, while using force to demolish or destroy buildings and assets under Section 22 of the 1961 national parks law is an effective way to enforce it, the provision does not allow officials to apply discretion in choosing administrative enforcement measures. Burning down assets and homes seriously breached the right of the six villagers.

“The damage caused to the six plaintiffs was excessive compared to the need to uphold public interest,” it said. 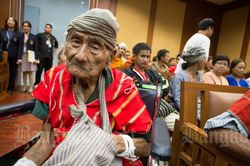 The court said the officials should have issued a written administrative order asking the plaintiffs to deal with their structures and assets and then sent them a notice later about the deadline, fine and other details. They failed to do these before taking the action.

According to Amnesty International Thailand, Mr Ko-ee was born in 1905 in the area which was declared part of Kaeng Krachan National Park 76 years later.

In 1996, authorities asked Karen people living in Bang Kloi Bon to move downhill to Ban Pong Luek-Bang Kloi but Mr Ko-ee could not adjust himself to the new environment and went back to live in Bang Kloi Bon.

In 2011, Kaeng Krachan National Park officials, led by chief Chaiwat Limlikhitaksorn, burned down the houses and barns of the villagers and seized farm tools and equipment from them in six separate incidents. Mr Ko-ee was also airlifted to the lowlands.

The centenarian is the grandfather of Porlajee Rakchongcharoen, known as Billy, 30, who was last seen in government custody at the park in April 2014.