Research findings show that despite being Thailand's national animal, elephants are not popular among all citizens. 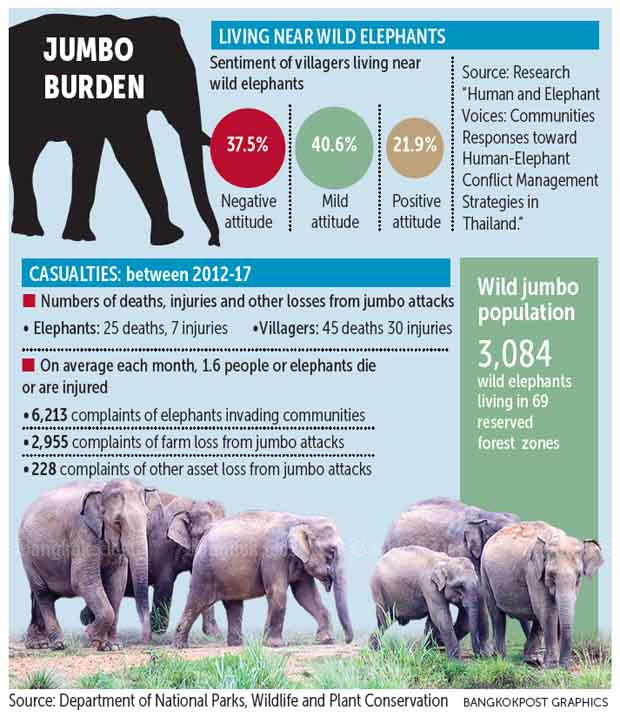 Only 20% of villagers living near forests with wild elephants said they have a "positive attitude" towards their jumbo neighbours, while 37% admitted they harbour "negative feelings."

The study took two years to complete and was released last Monday. It was funded by the Thailand Research Fund (TRF).

"The study is an alarm that warns us that conflict between elephants and humans is heating up and measures need to be taken to address it," said Phichet Noonto, a researcher with a biology background from Mahidol University, during the report launch event recently.

The study was based on Mr Pichet's field visits and interviews with 271 villagers living in 41 communities adjacent to 13 forests with large elephant populations across the country.

"We found the situation in the eastern forest areas to be the most worrying," said Mr Pichet.

"In five provinces near Khao Ang Rue Nai Wildlife Sanctuary, the relationship between humans and wild elephants are in precarious shape."

The study found that 57% of respondents who said they have a "negative attitude" towards elephants resident in one of these five provinces.

Villagers living near wild forests in the western and southern regions also harbour negative feelings but to a lesser degree, said Mr Pichet.

Locals require authorities' help, including the implementation of effective warning systems and special funds to compensate for the loss of properties and farm products from elephant attacks, according to the study.

Prasit Sae-Lee, a community leader from Kaeng Hang Maew district in Chanthaburi province who presided over the launch, said locals understand the elephant is the nation's beloved animal. However, he asked the public to sympathise with farmers who have lost their money due to attacks from the animal.

"Farmers need to get loans out from the bank to harvest and our loans can disappear in one night when our wild neighbours walk onto our farms, looking for food," said Mr Prasit whose village is adjacent to the Khao Ang Rue Nai Wildlife Sanctuary, known as a high-density wild elephant area.

Pinsak Surasawadee, deputy director-general of Department of National Parks, Wildlife and Plant Conservation (DNP), said that the pilot project "Elephant Landscape" will be launched in the five provinces of the eastern region to solve these problems between elephants and villagers.

The project will focus on providing more food and water resources, and adjusting forest landscape to contain the elephants.