Capital punishment must remain to deal with severe crime and ensure national peace and most people agree with it, Prime Minister Prayut Chan-o-cha said Tuesday.

He was responding to critics of the execution on Monday of a 26-year-old man convicted of a brutal crime.

When the government considered whether the death penalty should be revoked, most people thought it should remain in place, Gen Prayut said.

“The death penalty is legitimate. Many cases of severe crime have happened. Capital punishment exists to guarantee national peace and teach lessons. It is a necessity for us and people want it,” the prime minister said. 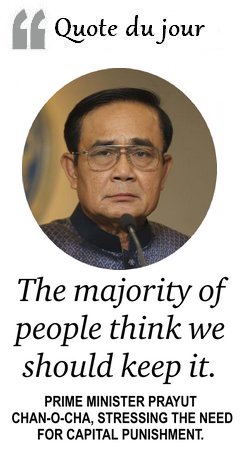 Executed with lethal injection on Monday was Theerasak Longji who was convicted for the brutal killing of a 17-year-old boy in Trang province in 2012.

He stabbed his victim 24 times and made off with the victim’s mobile phone and money although his victim tried to run away and beg for life. Theerasak committed the crime when he was 19 years old. He was drunk and angry with the victim who was the new lover of his ex-girlfriend.

"This is a deplorable violation of the right to life. Thailand is reneging on its own commitment to move towards the abolition of the death penalty and is putting itself out of step with the current global shift away from capital punishment.

"There is no evidence that the death penalty has any unique deterrent effect, so the Thai authorities’ hope that this move will reduce crime is deeply misguided. The death penalty is the ultimate cruel, inhuman and degrading punishment and provides no quick-fixes to problems the authorities want to confront.

"After almost 10 years without an execution, this represents a major setback in the country’s journey towards abolition. The Thai government must immediately halt any plans to carry out further executions and establish a moratorium on the implementation of the death penalty.”

Amnesty International on Tuesday held a symbolic protest in front of the Bangkwang Central Prison where Theerasak was executed.

Piyanuch Kotsan, director of Amnesty International Thailand, said execution was not the answer to crime and was a serious violation of rights.

“If society doesn’t want to see violence or murder, we shouldn’t resort to violence when solving problems.

"Several studies have been conducted abroad and locally, by the Justice Ministry, and they’ve found the death penalty could not solve a crime,” she said.

There is no evidence the punishment would deter people from committing a crime.

Mrs Piyanuch said the rally on Tuesday was not aimed at supporting criminals.

"We support punishments but perpetrators must have access to a fair trial and the penalties carried out in other manners.”

Most of the prisoners on death row are poor with no access to lawyers. In some cases, they were not guilty.

Monday’s execution tarnished the country’s image and would affect Thailand's commitment to the Universal Declaration of Human Rights which it ratified in August 2009.

“If Thailand hadn’t used the death penalty for 10 years, or by August next year, we would have been regarded as practically abolishing the capital punishment.

“Monday’s punishment eliminated that chance. It’s shocking how the Justice Ministry violated its obligation to end the death penalty."

At present, 142 countries or more than two-thirds of all countries abolished the death penalty. In Asean, the Philippines and Cambodia are the frontrunners. Attitudes and beliefs can change and Amnesty will campaign for an end to the punishment,” she said.

Human Rights Commissioner Chatchai Suthiklom said execution was not a solution but forgiveness would promote peace in society.

“Most serious criminals do not fear execution but are afraid of asset seizure,” he said.

After acknowledging the execution order on Monday, Theerasak was escorted to the execution area. He was allowed phone calls to bid farewell to his family.

The last meal he requested was grilled chicken with sticky rice. After the meal, he was brought to the injection room. He remained calm in his last moments.

According to Pol Col Naras, the cost of lethal injection was 12,365 baht -- 10,000 baht for execution reward and 2,365 for substances and equipment. The reward was necessary because no doctor agreed to administer the injection. The department had to train wardens to do the job and give a reward so they could make merit for the dead man, according to Buddhist beliefs.