A worker shows how to separate a monitor for recycling during a police raid at his factory in Bang Phli district. (Photos by Patipat Janthong)

The Industrial Works Department has suspended the licences of five importers of scrap electronics after they allegedly hired illegal factories to recycle more than 14,000 tonnes of the hazardous garbage.

The factories are being ordered to send the trash back to the five companies within 30 days, department chief Mongkol Pruekwatana said as his department on Tuesday unveiled its latest attempt to deal with the growing amount of illegal electronic waste, widely known as e-waste, in the country.

The department will use Global Positioning System (GPS) devices to track their transport and demand the factories record their travel routes in detail.

"This is to prevent them from dumping the garbage on the way," Mr Mongkol said.

His department listed the names of the five companies in a release to the media. 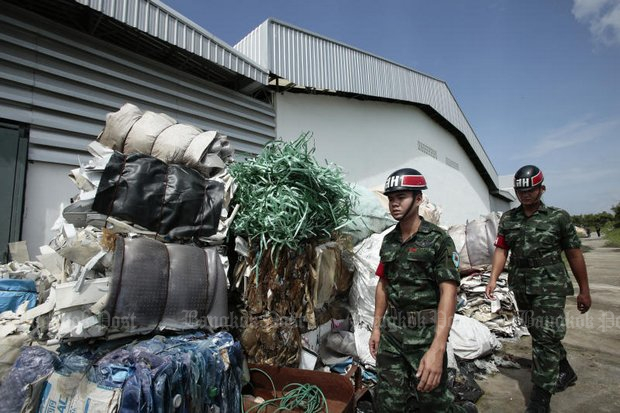 Mr Mongkol said his department would continue its inspection at 148 more e-waste recycling facilities to check whether their operations are in line with local laws.

In the long run, Mr Mongkol added, his department will consider reviewing the laws on border-crossing e-waste removal to better regulate waste imports destined for Thailand.

In 1997, Thailand ratified the Basel Convention, adopted in the Swiss city of Basel. The convention aims to control the transportation of hazardous waste across countries.

But it is not seen as completely prohibiting the export of scrap electronics from more developed to less developed countries.

Observers are worried Thailand and some other countries may become new dumping grounds for e-waste after China last year imposed a ban on importing foreign trash.

Mr Mongkol said officials should finish revising the related law this month before they forward their proposal to the National Environment Board for consideration.

The officers managed to nab three Myanmar and one Thai worker while other personnel, including the owner, fled.

Police suspect about 100 tonnes of e-waste had been imported illegally.

Pol Gen Wirachai's team has inspected 17 factories and charged all of them for engaging in illegal operations. Many of the suspects are not Thai but have exploited the country for profit, he said.