A wildlife official examines the dead wild elephant, covered by netting, on the roadside in Sanam Chai Khet district in Chachoengsao on Wednesday. (Photo supplied)

A wild elephant was found dead on a roadside in Chachoengsao on Wednesday morning and national parks officials were trying to figure out what killed it.

You Senatham, director of the Wildlife Conservation Office Area 2 said the dead male elephant was about 15 years old and was found on the side of Road 4022 in Sanam Chai Khet district.

The cause of its demise was not obvious, but veterinarians found an abrasion on the tip of its trunk, he said.

Police reported there was an electric fence around a tapioca plant nearby, but it had not been concluded that was the cause.

The area is close to Khao Ang Ruenai forest, a sanctuary for elephants and other wildlife. 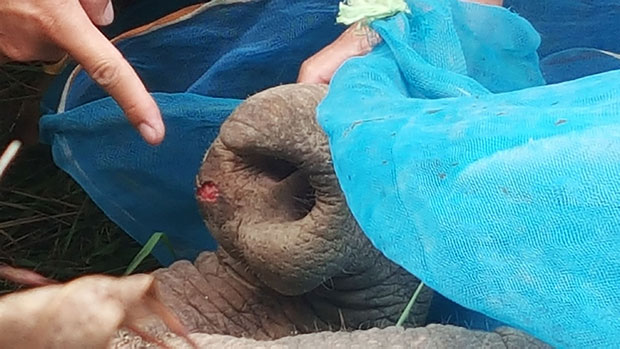 Parks officials show the abrasion on the tip of the trunk of the dead elephant. (Photo supplied)