Hunt goes on for kids in flooded cave
Thailand
General

Hunt goes on for kids in flooded cave

Navy Seals were to resume their search early this morning for a teenage football team and their coach who went missing in a cave in northern Chiang Rai on Saturday after rescue efforts were called off last night due to rising water levels.

They are believed to be trapped in a chamber in Tham Luang cave with no food.

The Seals reportedly ventured 8 kilometres into the cave, which is close to the Myanmar border.

Tham Luang cave is about 1km from Phahon Yothin Road in tambon Pong Pha, which is not far from the border. It is believed to be connected to other caves in the area.

"We are still optimistic they are all alive," said Deputy Prime Minister Prawit Wongsuwon. "Even though they may not have anything to eat, they should have water to drink."

He said the team of Seals has been working with other state agencies and authorities to find the 12 footballers, who are aged 11 to 16, and their 25-year-old coach inside the cave.

It is not known why they ventured into the cave or what has happened to them.

Some of the Seals reported seeing fresh footprints yesterday inside the cave, which is located in the Tham Luang-Khun Nam Nang Non Forest Park in tambon Pong Pha of Mae Sai district, leading them to believe the group may have got stuck inside a rock chamber.

A team of 17 Seals were sent in and began their search at 6am yesterday. They were called in to assist after rescue workers became overwhelmed by floodwater inside the cave. The region has recently been hit by heavy rain.

Meanwhile, His Majesty King Maha Vajiralongkorn Bodindradebayavarangkun has expressed his concern about the fate of the children and their coach.

The King extended his moral support to the families and to the officers engaged in the search, Interior Minister Anupong Paojinda said, citing the King's secretary.

Naval Special Warfare Command chief Apakorn Yukongkaew said the Seals had expected to find the group in a large chamber after wading through a 3km stretch of the cave, parts of which had been dangerously inundated.

But they were frustrated to find the chamber empty, despite taking hope from the discovery of fresh footprints at the scene, which led them to continue along the same path. 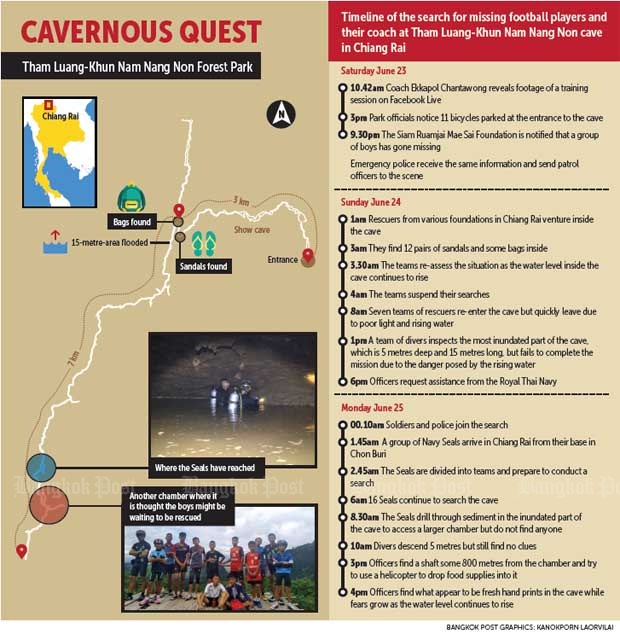 Chiang Rai deputy governor Passakorn Bunyalak said the Seals had successfully managed to traverse several flooded areas before being forced to turn back.

Another team was dispatched to ferry food and first aid supplies to the first chamber, he added.

The first Seal team placed glowsticks along the route to light it and mark the way, officials said.

Large ventilation hoses were being installed and water was being pumped out of the cave as the rising water levels are seen as one of the biggest threat to the trapped group and the search teams, who are collectively sucking the oxygen out of the cave, said Paitoon Naktae, director of the Disaster Prevention and Mitigation Regional Center Region 15 in Chiang Rai.

The army was being contacted to assist in siphoning water out of the Nam Phu reservoir, which lies under the cave, to further lower the water level, he said.

Rescuers were also said to be facing communication hurdles as radio devices and smartphones do not work inside the cave, meaning telephone lines had to be deployed.

Electrical cables have been laid but the power remains unstable and work was under way yesterday evening to try and resolve this issue.

Capt Anan Surawan, chief of the 1st Special Forces Regiment, said the Seal officers had been divided into four teams. He said local people have informed them the cave has several channels and at least one exit at the other end.

"One of the problems the divers have faced is that the water is very muddy, which has impaired visibility," said Capt Anan.

"But the search teams are doing the best they can."

Navy chief, Admiral Naris Prathumsuwan, said he was most concerned about the group having nothing to eat and suffering from exhaustion.

Despite the cave reportedly being flooded with up to 5 metres of water, Seal officers are more than capable of handling such situations, he added.

Namhom Boonpiam, mother of Mongkol Boonpiam, one of the missing children, said her son practiced football regularly but she had no idea why the team had taken a trip to the cave.

The team goes by the name "Moo Pa", which means "The Wild Boars".

Concern was first raised when their bicycles were spotted by park officials at 3pm on Saturday at the mouth of the cave, as the park was about to close.