A policeman gags on the stench Tuesday as Industry Ministry officials collect samples of an estimated 60,000 tonnes of electronic waste dumped illegally near a reservoir in Rayong's Pluak Daeng district. (Photo by Patipat Janthong)

The Department of Industrial Works (DIW) has promised to ban local factories from recycling plastic and electronic waste.

Department deputy chief Banjong Sukreeta said the proposed ban will effectively discourage factories from importing waste into Thailand and help authorities deal with the increasing amount of waste in the country.

He said the department is authorised under the 1992 Factory Act to forbid domestic plants to use plastic or electronic waste in their production processes.

The department is preparing to announce the ban, he added.

On a proposal that Section 44 be invoked to ban the import of both plastic and electronic waste, Mr Banjong said a working committee is studying the issue and, in the meantime, the department will delay considering whether to grant import permits.

Earlier, the department suspended the licences of five factories found to have breached the conditions involving the use of plastic and electronic waste for recycling.

The proposed ban was raised during a joint press conference between the DIW and the Customs Department after the inspection of a container suspected of being used to carry illegal waste into the country.

The container in question was found to contain capacitors and the DIW is expected to spend a month running checks on them to determine if they contain hazardous waste as stipulated under the Basel Convention.

If the owners do not claim them within 30 days, the containers will be opened and the cargo examined, he said.

According to Mr Chaiyut, plastic and electronic waste are imported via two main ports -- in Bangkok and Chon Buri's Laem Chabang.

At Bangkok port, 89 containers have been left unclaimed 30 days after imports while Laem Chabang port has 300 unclaimed containers. 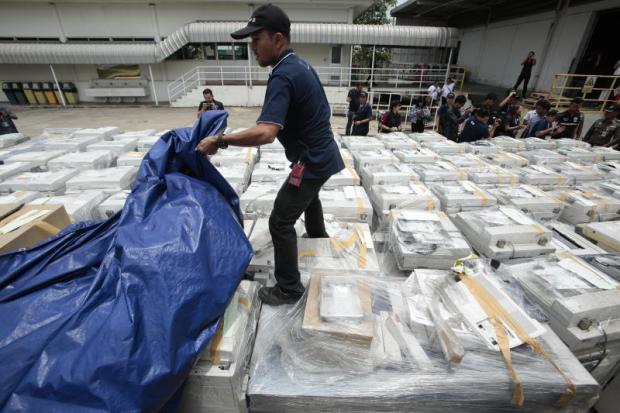 Officials inspect a factory operated by Fuji Xerox Eco-Manufacturing Ltd in Chon Buri's Si Racha district where they found its operations to be in compliance with the law.

Last year, about 53,000 tonnes of plastic and electronic waste were brought in for recycling.

As of June this year, about 37,000 tonnes of such waste had been imported.

The inspection followed a tip-off by locals who spotted trucks unloading goods suspected to be toxic waste.

The warehouse operator was charged with the illegal possession of hazardous waste.

The police team also seized another 14 containers near the warehouse after the truck drivers fled upon seeing the officials.

Pol Gen Wirachai said a probe showed the waste was destined for Laem Chabang port for export, but the operators did not obtain proper documents for handling transport and storage.

KYIV: Ukraine President Volodymyr Zelensky warned on Saturday that only a diplomatic breakthrough rather than an outright military victory could end Russia's war on his country, as Moscow cut gas supplies to Finland.