CHIANG RAI: High-pressure water pumps were installed at Tham Luang cave early Wednesday morning as rescuers continued efforts to save 12 trapped young footballers and their coach, but were unable to stem the rising floodwater inside the cave, Thai Navy SEAL said on their Facebook page.

Around 4.45am, a fresh downpour pounded the area, causing flooding in the third chamber deep inside the cave, forcing rescuers to retreat to the second chamber. Water rose about 15 centimetres an hour.

Rescue teams were working against the clock to drain the cave but more rainwater kept entering it.

Maj Gen Bancha Suriyapan, commander of the 37th Army Circle, said soldiers combing the hillside above the cave in search of other passages into the cave found four ceiling shafts on Tuesday, but two of them were clogged.

Rescuers and soldiers would survey the two other ceiling shafts again, and hoped to be able to rappel down into the cave, Maj Gen Bancha said.

For the time being, helicopters could not be used to survey the area as continuous rain meant poor visibility, the 37th Army Circle commander said.

He warned social media users against sharing fake news about the search for the missing footballers and their coach.

Supreme Commander Thanchaiyan Srisuwan said on Wednesday the United States Pacific Command  was sending a team of navy divers and disaster experts to help with the search. Theywere en route from Hawaii.

Interior Minister Anupong Paochinda said on Wednesday that rescue teams continued the search despite rising floodwater inside the cave. Divers had re-entered the cave to continue their search, he said.

Gen Anupong said all hopes were on the children still being safe as they regularly went into the cave and were fit and strong. 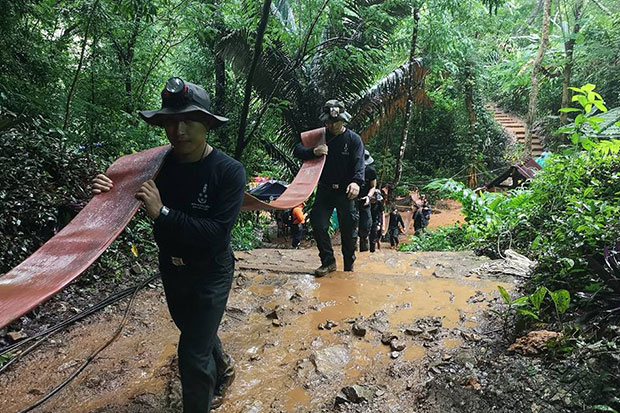 Prime Minister Prayut Chan-o-cha said resources from all agencies were being used in the search for the 13 missing people. Three foreign divers had also joined the operation.

He hoped that there would be good news soon and urged people not to be discouraged. Gen Prayut was speaking before chairing the cabinet meeting.

Soldiers carried large hoses into the cave as efforts continued to pump out the flood water, according to an AFP reporter at the scene.

Distraught relatives have been camped out for days praying for the team's safe return.

"I hope that today with the help from all teams he will be saved. I'm certain in my heart," Pean Kamlue, the mother of a 16-year-old boy in the cave, told AFP.

The young football team, called the "Boars", and their 25-year-old coach are familiar to the area and know the cave well, officials said.

They went into the cave after football practice on Saturday and a mother of one of the young players alerted authorities when her son did not come home.

Bicycles, shoes and backpacks belonging to the young footballers were found near the cave's entrance, and divers said they discovered footprints and handprints inside one of the chambers on Monday.

A sign at the cave's entrance warns visitors not to enter the cave during the rainy season from June to November.

Rain was forecast to continue throughout Wednesday. 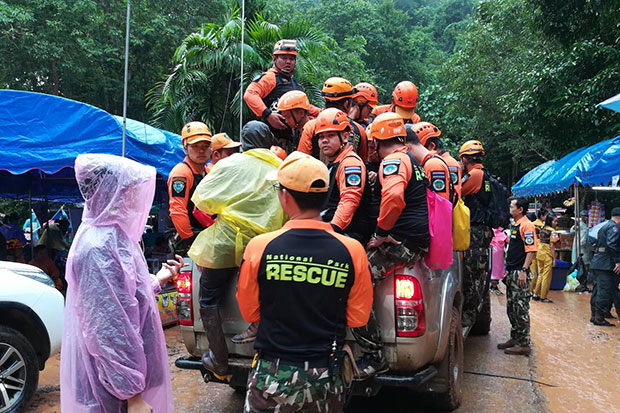 Rescuers board a pickup truck to head to a passageway they hope to use to rappel down into the cave in Mae Sai, Chiang Rai in search for the missing footballers and their coach. (Photo by Saiarun Pinaduang)