Drilling starts to pump more water out of cave

Workers start drilling a hole at Tham Luang on Thursday to try to quickly drain water from the cave. (Photo by Patipat Janthong)

Workers are drilling a hole near the entrance of Tham Luang to quickly drain water from the flooded cave and clear the way for divers to resume their search of 13 trapped persons.

The drilling decision came during the meeting on Thursday morning after the rescue operation was stalled by the floodwater in the cave.

Kobchai Boonarana, the deputy director-general of the Disaster Prevention and Mitigation Department, said drilling equipment from the Groundwater Resources Department and private companies were running at full capacity to drain water from the cave where 12 young footballers and their coach have been trapped since Saturday afternoon.

Divers have to suspend the mission as water inside still blocks the passage to Pattaya Beach, a high ground deep inside the cave where the boys and the coach might be waiting for help.

Rain came down on the rescue site in the Tham Luang Khun Nam Nang Non Forest Park in Mae Sai district in Chiang Rai after the group was reported missing on Saturday night. It rained again on Thursday evening. 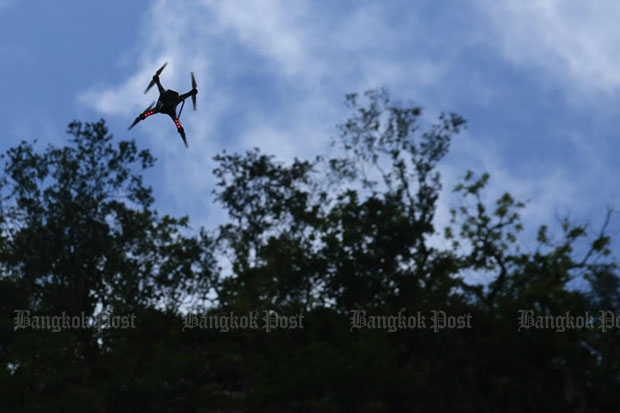 A drone flies over the cave on Thursday to survey holes that could lead to chambers inside Tham Luang. (Photo by Patipat Janthong)

Rescuers were also scouring the mountain in search of alternative entrances to the flooded cave.

"There's not much we can do right now,'' Interior Minister Anupong Paojinda said, adding that a key passageway was completely flooded. "We have to wait for the water level to decrease. [Divers] can't do anything right now.''

Thai rescuers have been joined by a US military team and British cave experts. At a morning briefing, the Thai Seals explained to the US team that water levels had been rising overnight at a rate of about 15 centimetres per hour, complicating efforts to squeeze through tight passages, some of which require the divers to contort their bodies around L-shaped bends.

Gen Anupong said there are three locations that rescuers are looking at and they will have to work with the Geological Department and their equipment to explore further, using small cameras for example. 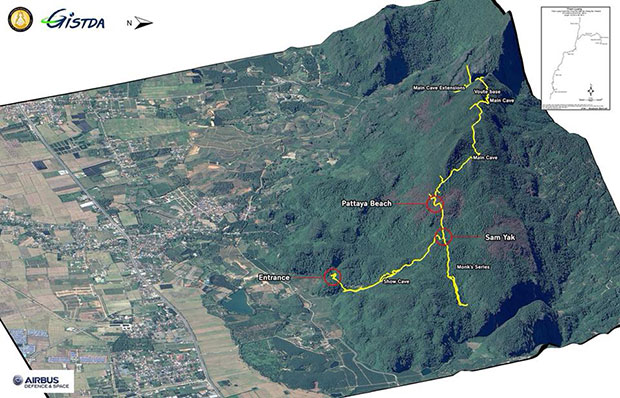 Anmar Mirza, national coordinator of the National Cave Rescue Commission in the United States and editor of the book Manual of US Cave Rescue Techniques, said that in a situation like this it would seem there were only two things that could be done: pump the water down and search for alternative entrances.

If there were a high-quality map, drilling would be another possibility, but that is extremely difficult for a number of reasons and could also take days to weeks, he said, adding that it was important not to take needless risks.

Mr Mirza said the boys' youth and health is to their advantage and if the cave is not too cold, they should be able to survive four to five days with no water and a month or more with water but no food.