SURAT THANI: A drug courier was arrested after more than 500,000 methamphetamine pills worth about 100 million baht were found hidden in a Mercedes-Benz he was driving in Ban Na San district.

Sompot Pattanamachaising, 34, of northern Mae Hong Son province, was stopped on Tuesday at a police checkpoint at Yang Ung intersection on Asia Highway 41 in tambon Namphu of Surat Thani province.

A search of his vehicle, which had Bangkok licence plates, uncovered a hidden compartment  at the back,  Pol Lt Gen Sorasak Yenprem, commander of Provincial Police Region 8, said at a media briefing on Friday.

Mr Sompot confessed he had been hired by a man identified only as "Erng" to take the drugs from Chiang Mai to Songkhla province. He was held in police custody for legal action on drug charges. (more below) 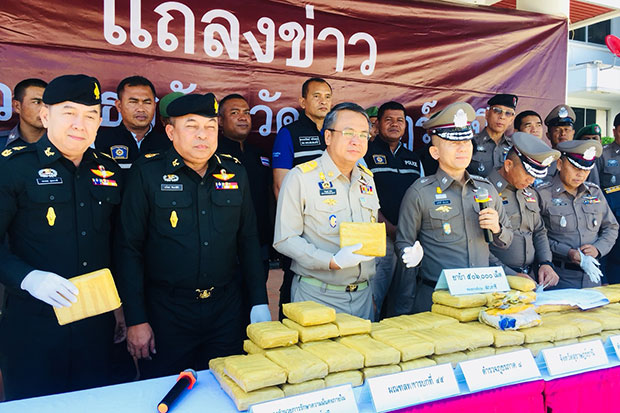 Eighty-four packages containing 506,000 speed pills worth about 100 million baht, seized in Surat Thani, on display during the police news conference in Surat Thani on Friday. (Photo by Supapong Chaolan)

Police later searched his dockyard and found one worker using drugs. Some crystal meth, heroin and speed pills were found in the dockyard. Police has confiscated  a pistol and 56 bullets belonging to Mr Sakda.