Race on to beat wet weather later in week

Rescue team members enter the Tham Luang cave on Sunday. The team got a break when the rains stopped and the pumps began making progress. (EPA photo)

Search and rescue teams are racing time to locate and retrieve a group of 13 people believed to have been trapped inside Tham Luang cave complex before more rain arrives in two days.

The weather is expected to be in their favour early this week with the Meteorological Department saying less rain is expected over the next two days while wet conditions will return on Wednesday.

Those engaged in the rescue operations hope to make best use of the dry conditions to pump the water out of the flooded passages which have impeded the search so far, even though water pumps have been working at full capacity and aquifer wells have been drilled to lower the water level inside the cave.

No contact has been made so far with the 12 young footballers and their coach who have been missing since June 23, but rescue activities have nevertheless made headway. 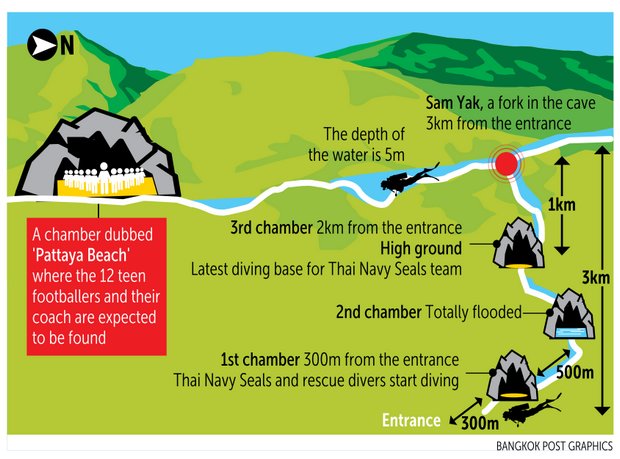 Divers have established a forward command in an area known as Chamber 3, shortening the distance between the rescuers and the missing group which is believed to have taken shelter in a section known as “Pattaya Beach”.

The distance between Chamber 3 and Pattaya Beach is believed to be 3 kilometres. It has been reported that the divers have ventured 600 metres towards the target area.

The divers, both Thais and foreigners, are advancing, but at a slow rate as the whole cave network remains heavily flooded and the water is still muddy, reducing visibility.

A stream of assistance and moral support continues to pour in for the rescue teams and the lost boys.

His Majesty the King has provided chargeable LED light bulbs which are being used to light the inside of the cave.

His Holiness the Supreme Patriarch has urged Buddhists to study the Metta Sutta to help them prepare their minds for making powerful wishes for the safety of the missing people.

Last Friday, His Holiness led a Metta Sutta-based prayer for the football team at Royal Plaza in Bangkok upon royal command.

Naval Special Warfare Command chief Apakorn Yukongkaew vowed Sunday: “We won’t turn back ... We will continue to move forward until we find the boys.”

The commander said safety is a priority and the divers use ropes to guide them and compressed air tanks have been placed at every 25-metre mark along the way, adding that the divers will also carry spare tanks and food supplies for the missing.

The rescue effort has three main strands: divers are trying to swim through the flooded caves to search for the missing team; soldiers are looking for fissures that may provide more ways in to the complex, and engineers are pumping out millions of gallons of water.

There are several teams of foreign specialists involved. Groups from Australia, Britain, China, Laos and Myanmar are also assisting in the operation, as are several Thai companies, including the country’s biggest oil and gas exploration firm, PTT Plc.

The United States sent a team of 17 Air Force rescue specialists based on the Japanese island of Okinawa to aid in the search, along with additional support staff.

The latest foreign assistance is a team from Australia, who arrived at the Tham Luang cave complex on Sunday.

Australia's foreign affairs, defence and home affairs ministers said in a joint statement late on Saturday that Australia was working closely with the Thai government and the Royal Thai Army, who are leading the search operation.

The ADF has also deployed an official to the rescue command centre in Chiang Rai as a specialist liaison officer to provide operations and planning expertise. An officer of the Department of Foreign Affairs and Trade (DFAT, Australia's foreign ministry) was also deploying with the AFP rescue team to assist with coordination.

James Wang, a member of the Chinese rescue team Green Boat Emergency Organisation, believed they could help with the operation.

"We have the skill to the rescue cave and the skill of SRT, single rope technology. So I think, in this environment we can do something for the children," he said.

Another Chinese team has brought underwater drones and 3D imaging, though so far the floodwater has been too murky for it to be effective.

Survival efforts favour the boys and their coach.

Cave temperatures are believed to be between 20C and 25C and the porous limestone rock means there should be enough oxygen, although some caves in the region are known to contain bad air pockets with carbon dioxide.

Messages the children sent before setting off to explore the cave on Saturday suggest they had taken torches and some food.

The missing boys are at risk from infection from unclean water or if they have contact with an animal inside the cave, he added.

There has been no contact with them since they went to explore the Tham Luang caves after a football practice on June 23.

Outside the cave, all units are on standby with preparations being made should any of the boys need emergency treatment or transportation.

Vehicles have been barred from entering the site to facilitate this.

Evacuation and medical drills carried out on Saturday underlined the need to regulate traffic around Tham Luang cave as emergency routes were blocked by uncooperative motorists.

Police, troops and rescue teams continue to search for new shafts that will help them gain further access to the cave network. 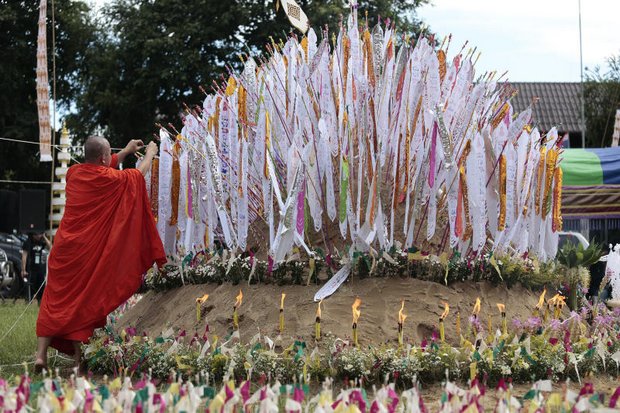 A monk decorates a stack of sand with Lanna northern-style flags during a rite held Sunday on the football pitch of Bang Chong School in Mae Sai district near the cave. More than 500 well-wishers, including monks and laymen, took part. (Photo by Patipat Janthong)

The search for shafts on the mountainside looks promising and experts are examining the findings to see if any of them can serve as a backdoor to reach the missing group, he said.

The governor has also stressed that extra funding is neither requested nor needed and called on the public to alert police of any scams.

Meanwhile, the government has launched the @realnewsthailand account on the Line chat application to counter fake or distorted news.

Government spokesman Lt Gen Sansern Kaewkamnerd said the account is not limited to the missing group.