Video sent from the 'Pattaya Beach' section of the Tham Luang caves showed all 12 boys and their coach moving, and alert - their first question being 'How long have we been here?' (Photo via Twitter/@thaiarmy100)

The 12 missing boys and their football coach have been found in Tham Luang by a British cave explorer - all alive and apparently safe.

A dramatic video stream from the Pattaya Beach area deep inside the cave indicated an English cave explorer was the first to reach the boys.

The group, mostly seated and with baggy football shirts pulled over their knees, asked for food and to leave the cave immediately, according to the video, which was shared on the official Facebook page of the Royal Thai Navy Seals.

It showed all 13 members of the team moving, alert and with questions: "How long have we been here?" and "When will we get out?"

"Many, many people are coming," said the English rescuer. "We are the first. Don't worry now."

The dramatic footage above was shared on the official Facebook page of the Seals, the nickname of the elite Royal Thai Navy Underwater Demolition Team (UDT).

It shows the boys in oversized, mud-slicked football jerseys crowded together on a small mud cliff surrounded by water as rescuers finally found them.

"Thank you!" one of them says, while another shouts "13" when asked by a British diver how many they are.

One of the British divers who found the group replies simply: "Brilliant!"

"Many, many people are coming... we are the first", a diver tells them as he lights the group with a torch.

"You have been here for 10 days, you are very strong," one of the divers tells the boys.

A child in the foreground appears to bow in gratitude and says "thank you" as his voice falters.

But first, "We will bring food to them and a doctor who can dive. I am not sure they can eat as they have not eaten for a while."

Divers reached the group after enlarging a narrow, submerged passageway that was too small for them to get through while wearing their air tanks.

Earlier, a team of rescuers had used huge pumps to reduce the water level, and divers had placed guide ropes and air tanks along the route to reach the site of the trapped boys.

Another round of hard work now begins to extract them from the flooded and cramped cave.

"When the medics have evaluated the kids to see if their health is in good condition, we will care for them until they have enough strength to move by themselves, and then we will evaluate the situation on bringing them out again later," Narongsak said.

Anmar Mirza, a leading American cave rescue expert, said many challenges remain for the rescuers. He said the primary decision is whether to try to evacuate the boys and their coach or to supply them in place.

"Supplying them on site may face challenges depending on how difficult the dives are," Mirza, coordinator of the US National Cave Rescue Commission, said in an email.

"Trying to take non-divers through a cave is one of the most dangerous situations possible, even if the dives are relatively easy. That also begets the question: If the dives are difficult then supply will be difficult, but the risk of trying to dive them out is also exponentially greater."

"Thai Navy seals have found all 13 with signs of life," the governor told reporters. "We found all 13 safe... we will take care of them until they can move."

Aisha Wiboonrungrueng, the mother of one of the boys, 11-year-old Chanin Wiboonrungrueng, smiled and hugged her family. She said she would cook her son a Thai fried omelette, his favourite food, when he returns home. 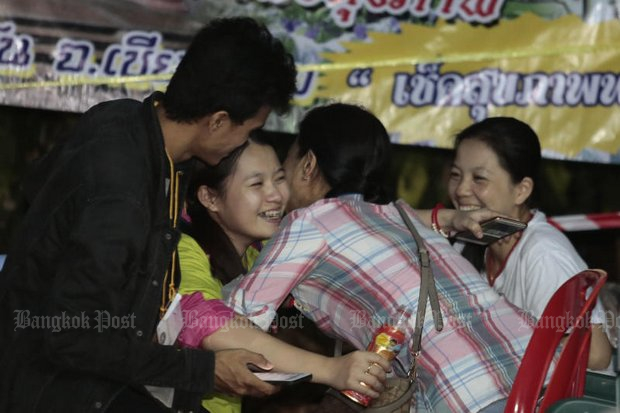 Family members who had camped out near the cave entrance since their boys disappeared laughed, cried and hugged when they received news Monday night that the Wild Boar members had been discovered alive. (Photo by Patipat Janthong)

Despite the careful wording by Mr Narongsak, all early indications were that the boys and coach have survived their ordeal without major physical problems.

This photo below, shown by some media on Monday as proof the boys were safe, was actually provided by one of the boys' mothers, and was taken on a previous outing into the Tham Luang caves by the Wild Boar team members. 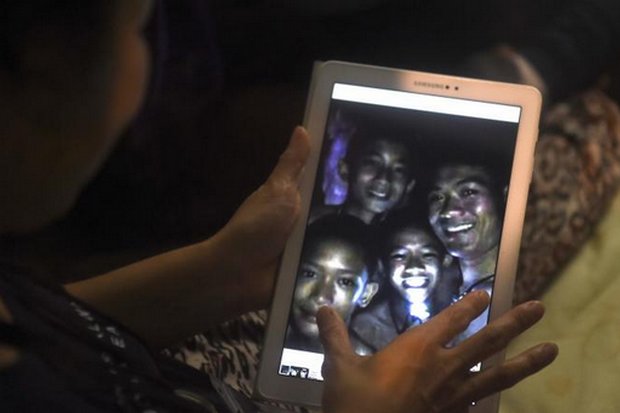 His Majesty King Maha Vajiralongkorn Bodindradebayavarangkun had said he was following events closely, helping to focus the attention of government officials.

Prime Minister Prayut Chan-o-cha was briefed about the discovery of the children and coach, and wished them "safe and speedy recovery", according to his deputy spokesman.

He made special mention of the foreign teams involved in the 10-day search for the Chiang Rai youngsters and their coach.

The photo and Bangkok Post graphic below show the main contributors of aid to the operation from abroad. 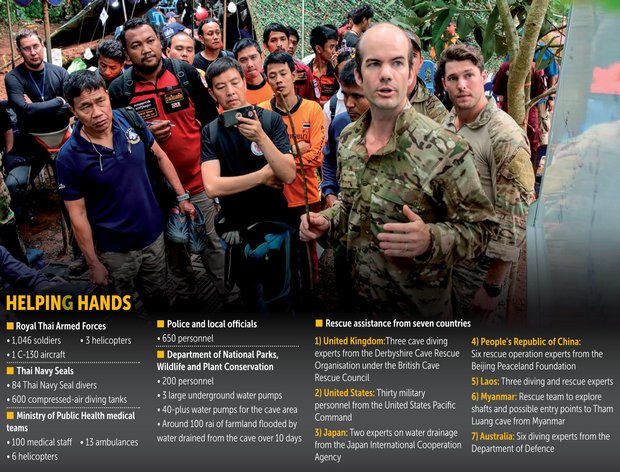 "Gen Prayut wishes to thank the tremendous efforts of all international units that have come to assist the Thai authorities in rescuing the youth football team that was stuck in the caves in Chiang Rai," said the spokesman. 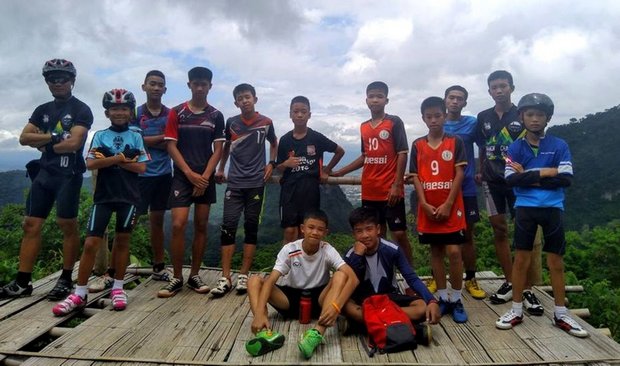 The boys and their coach went to the caves by bicycle after football practice on Saturday, June 23. (Photo via Facebook)

The amazing moment that British divers found the 12 Thai children and one adult lost in a cave for 10 days.  #Thailand #ThaiCaves pic.twitter.com/hVvYx9K8BP