Thai workers and associated officials watch to the flooded cave as they attempts to drain the water from the cave during searches and rescue operation for missing football players and their coach at the Tham Luang cave in Tham Luang Khun Nam Nang Noon Forest Park in Chiang Rai province, Thailand, 29 June 2018 (reissued 02 July 2018). Chiang Rai provincial Governor Narongsak Osatanakorn said on 02 July that all twelve missing boys from a youth soccer team and their coach were found alive in a cave. EPA

With more rain forecast, rescuers are racing against time to bring 12 boys who cannot swim and their coach out of flooded Tham Luang cave before the water rises again.

Interior Minister Anupong Paojinda said in Bangkok on Tuesday that the 13 footballers would be brought out of the cave in Chiang Rai's Mae Sai district through the passage to its main entrance. Rescuers would try to minimise the necessity for them to dive by pumping as much water as possible out of the cave first.

They would have to dive at some sections, especially through a narrow section where close escort was not possible. They would have to use diving gear by themselves and pass through one after another, Gen Anupong said.

"Diving is not easy. Those who have never done it will find it difficult, because there are narrow passages in the cave. They must be able to use diving gear. If the gear is lost at any moment, it can be dangerous to life," he said.

Except for narrow holes, two divers would escort each of them. Rescuers were believed to have a good plan for the evacuation, Gen Anupong said.

"As rain is forecast in the next few days, the evacuation must speed up. Diving gear will be used. If the water rises, the task will be difficult. We must bring the kids out before then," he said. (Continues below)

"Cave diving is an incredibly dangerous activity for people who are very experienced doing it, and you're looking at taking people who have no experience." Anmar Mirza, a cave rescue expert, says diving out is the most dangerous option for the soccer team https://t.co/gVBGuZBhYb pic.twitter.com/StWjKHBEAE

Chiang Rai Prachanukroh Hospital in Muang district, Chiang Rai, has arranged a ward where all 13 could be cared for, and accommodation for 54 relatives,  Dr Thongchai Lertwilairatanapong, public health inspector-general, said.

All of the team were in good condition but in need of proper nutrients. Their eyes had been in the dark for along time and needed to adjust to normal light. They would need the protection of sunglasses, he said.

The boys must regain their strength first. None of them know how to swim, he said.

Divers said the boys were in a small space around 2 kilometres into the flooded cave and between 800m and 1km below the surface, making any rescue very difficult.

They had been trapped by rising flood water caused by continuous rain the area since entering the cave system after football practice on  Saturday, June 23. 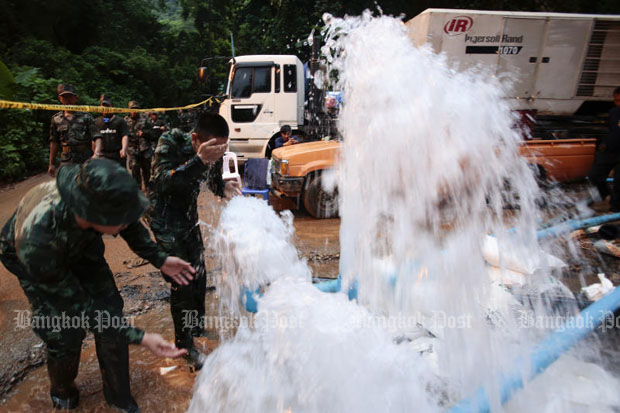 Members of the rescue operation at Tham Luang cave wash with flood water pumped out of the cave on Tuesday. Pumping is being accelerated to enable the evacuation of the 12 boys, who cannot swim, and their football coach from the cave in Mae Sai district of Chiang Rai. (Photo by Patipat Janthong)