Perilous exit dive only way out for boys
Thailand
General

Perilous exit dive only way out for boys

Coming rain may force boys to swim for safety

'The only option' It now seems swimming with scuba gear through muddy water in the dark cave is the only way out for the boys - with the added urgency to move before rain raises the water level again. This demonstration of swimming through murky water makes it appear even easier than the test that lies ahead for the Wild Boar football team to reach the outside world safely. (Photo via YouTube/welder4fun)

As the nation continued to rejoice at the news of all the boys, who are aged 11-16, being found alive at 9.38pm on Monday night after an exhausting 10-day search, spirits were dampened at the prospect of having to keep them in the labyrinthine cave network in Chiang Rai's Mae Sai district for up to four more months due to the coming monsoon.

Cave-diving expert Ben Raymenants, who was 400 metres behind the two Britons who located the boys just beyond a chamber dubbed "Pattaya Beach", said the weather would be "the deciding factor" regarding which exit strategy would be deployed. 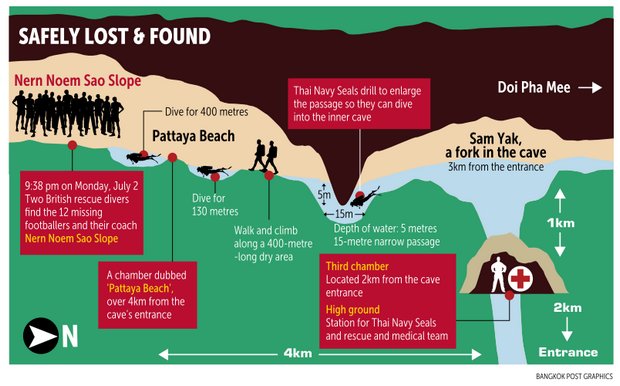 If the pumping operations are a success and the water levels in the cave recede, then alternatives may be found.

However, with more heavy rain forecast over the coming days, authorities said Navy Seals and cave diving experts would begin teaching the boys how to swim and dive either from today or tomorrow.

Navy Seal Chief Rear Admiral Aphakorn Yoo-kongkaew vowed to bring them all out safely so they could be reunited with their families. He said they would be brought out when they were mentally ready and physically fit for the potentially punishing journey home.

"It may be four months, one month or one week. There's no need to hurry," he said.

"The first plan is to reduce the water level and get them out but if we can't, we will have a backup plan," he added.

The third chamber inside the cave network has now been transformed into a rescue operation command centre stocked with life-saving equipment, diving gear, food and medical supplies, he added.

He said the whole team is now safely in the hands of seven Seal divers, a military doctor and a nurse from the Royal Thai Navy's underwater and hyperbaric medicine unit, who have volunteered to stay with them for as long as it takes, even months.

High-energy food and rejuvenating mineral salts were given to them so they can rebuild their strength after 10 days with almost no food or fresh water.

In the event of rising water levels, at least four days of food supplies have been prepared and 70 oxygen tanks sent in, officials said.

Phone cables were brought into the area so the boys could contact their parents.

More than 1,000 rescuers continued with frantic efforts to pump water from the cave. As of 11am Tuesday, the water level at the cave's entrance was 39 centimetres. About 300 metres deeper inside the cave it had dropped to 20cm.

His Majesty the King has endorsed an order transferring Mr Narongsak to serve as the governor of the smaller province of Phayao, assistant government spokeswoman Col Taksada Sangkachantra said.

However, he will stay in Chiang Rai until the mission is completed, she said.

Interior Minister Anupong Paojinda said the 13 footballers would be brought out of the cave through the passage leading to its main entrance.

They may have to dive some sections, especially through a narrow section where close escort is not possible. If this option is chosen, they would have to use diving gear by themselves and pass through one after another, Gen Anupong said. 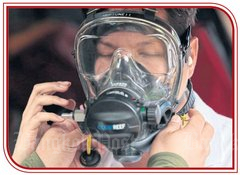 A reporter tries on a diving mask that the boys will be trained on. (Photo by Patipat Janthong)

"Diving is not easy. Those who have never done it will find it difficult, because there are narrow passages in the cave. They must be able to use diving gear. If the gear is lost at any stage, it could be perilous," he said.

Except for narrow holes, two divers would escort each of the boys. Rescuers have already formulated an evacuation plan, Gen Anupong said.

"As rain is forecast in the next few days, the evacuation must be sped up. Diving gear will be used. If the water rises, the task will be difficult. We must bring the kids out before then," he said.

Chiang Rai Prachanukroh Hospital in Muang district of Chiang Rai has arranged a ward where all 13 team members could be cared for, with accommodation for 54 of their relatives, Dr Thongchai Lertwilairatanapong, public health inspector-general, said.

All of the team are in good condition but they are in need of proper nutrients. They have been in the dark for some time and their eyes need to adjust to normal light. They would therefore need the protection of sunglasses, he said.

The boys must regain their strength first. None of them know how to swim, Dr Thongchai said.