The Bank of Thailand plans to launch a new series of banknotes, codenamed Series 17, on July 28 as part of the national celebrations for His Majesty the King's 66th birthday, Bank of Thailand governor Veerathai Santiprabhob announced Tuesday.

The printing of the Series 17 notes has won approval from the King already and they will be in circulation from July 28 onward, said Mr Veerathai, adding that this means the public will be able to withdraw the new series banknotes from commercial banks and financial institutions from then on.

The front of both the banknotes in this series will contain a portrait of the King dressed in Royal Thai Air Force uniform as the main picture.

The main picture on the back of the 1,000-baht banknote is a portrait of King Bhumibol Adulyadej, or King Rama IX, printed along with a portrait of His Majesty the King.

Both the 500- and 1,000-baht banknotes in Series 17 will be printed using a number of special techniques to prevent counterfeiting, including a 3D magnetic ink printing technique which creates a 3D illustration that appears as if it is moving when looked at back and forth from two different angles. 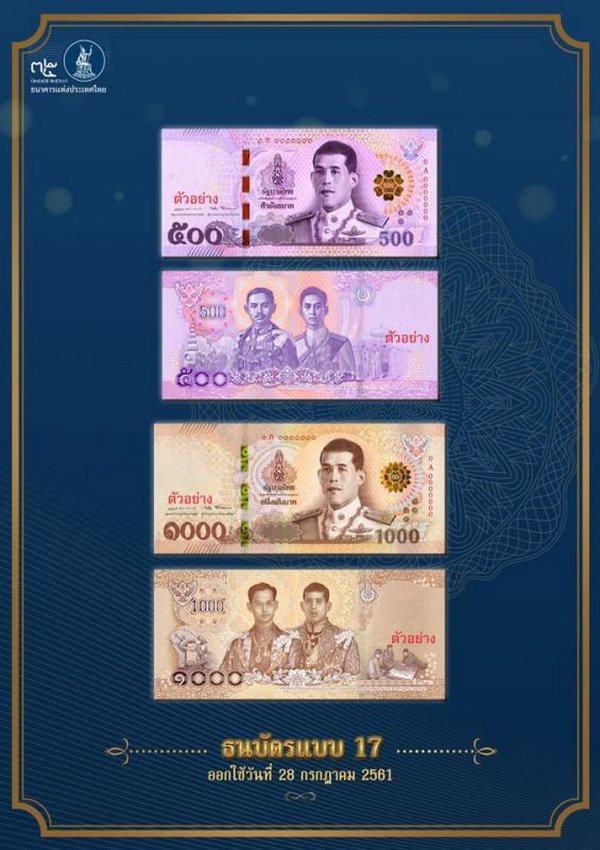