Navy Seals are urgently training 12 young footballers and their coach to use diving gear so they can venture out of the partially flooded Tham Luang cave in Chiang Rai's Mae Sai district, where they have been trapped for 11 days.

Meanwhile, His Majesty the King, according to Deputy Prime Minister Prawit Wongsuwon, said the boys have to be extracted as quickly as possible.

Gen Prawit said Wednesday the boys have yet to be taken out due to strong currents inside the cave while officers are teaching them to swim and dive.

"Instructions were given by the King that everyone [rescuers] must bring out the children as quickly as possible," Gen Prawit said.

"If the water recedes and currents become less strong, they would be able to venture out. There is noting to be worried about. All parties are working their best, particularly the Seals." 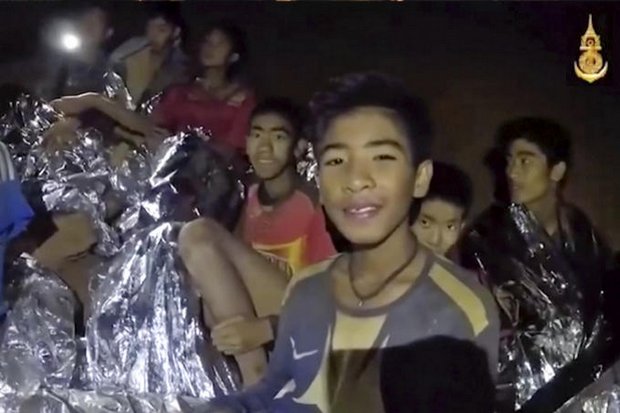 A new video on Wednesday by the Seals shows the boys in good spirits - wrapped in foil blankets above the cave waters, talking and even joking with two Seal minders. (FB/Royal Thai Navy)

Meanwhile, Prime Minister Prayut Chan-o-cha said the King gave instructions that this rescue operation should serve as a case study for future missions.

Gen Prayut was speaking as he presided over the 68th anniversary of the establishment of the 21st Infantry Regiment, Queen's Guard, in Chon Buri yesterday.

On the rescue plan, Gen Prayut said there are two methods in which the trapped group can come out. One is to drill openings from the cave ceiling, but they must find the right channels first, he said.

Another is to let the boys dive, which is not easy as the passageways are twisting, he said, adding the group would be taken out one by one while their readiness must also be assessed.

The prime minister stressed efforts will be made to take the 13 out of the cave as quickly as possible, but refused to pinpoint when this would happen. The group has been trapped in the cave since June 23 and was found by British divers on Monday.

Rescue operations commander Narongsak Osotthanakorn said he could not estimate how many days it will be before the boys would be taken out. "We can remove them when we are 100% sure that everyone is safe. They do not need to come out together. It depends on their readiness," said Mr Narongsak.

Work is under way to urgently pump out water inside and outside the cave while the water level inside the cave was reducing one centimetre an hour, he said.

Telephone lines are being reeled into the cave so as to help the boys talk to their relatives, Mr Narongsak said. The boys were learning how to use diving masks, but they had yet to dive due to strong currents.

When and how the boys would be extracted depends on the amount of water inside the cave, he said.

Regarding the survey of mountain openings to find ways to reach the boys from the cave's ceiling, he said there are 13 potential holes, of which three have been drilled, adding the deepest spot is 400 metres.

Mr Narongsak yesterday insisted he will still supervise the rescue operation until the last trapped person has been freed from the cave, even though he has been transferred from Chiang Rai to become the governor in Phayao. The transfer order took effect on June 29.

Maj Gen Wuthichai Issara, medical chief of the 3rd Army Region, said officers are in the process of building up the boys' strength. The boys were in good health, which is beyond expectation, he said.

Meanwhile, Chongklai Worapongsathorn, deputy director-general of the Department of Natural Parks, Wildlife and Plant Conservation (DNP) said water draining teams had succeeded in cutting off two major creeks that send water into the cave. Since last week, DNP officials have been working with local villagers to build weirs to divert water from two major creeks -- Huay Nam Dan creek in the north and Huay Makork to the south of the cave.

The authority found 50 out of 758 rice paddies were inundated by water drained from the cave, says Somkiat Prajamwong, secretary-general of the Office of the National Water Resources.

The rice fields were located in three villages around Tham Luang cave. Villagers agreed to let their farms be flooded to help the rescue operation.