The 9-member provincial sub-committee chaired by Gen Marut Limcharoen meets on Thursday and resolves to dismiss Nathaphop Boonthongtho, director of Patong Thanoen Samakkhi School in Bua Yai district, Nakhon Ratchasima, from the teaching service for a gross disciplinary violation in having a sexual affair with a 14-year-old girl student. (Photo by Prasit Tangprasert)

NAKHON RATCHASIMA: A disgraced school director accused of having sex with a 14-year-old girl at his school in January faces the sack after an education panel found him guilty of a gross disciplinary violation.

After a lengthy discussion, the panel found him guilty of a gross disciplinary violation involving  sexual misconduct and resolved unanimously to sack the school director from the teaching service. The finding will be forwarded to the provincial education panel, chaired by Nakhon Ratchasima governor Wichian Chantharanothai. 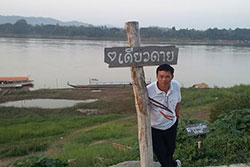 Mr Nathaphop, 51, was earlier suspended from his post at the school pending the probe into his sexual misconduct.  He was accused of having an extended sexual affair with a Mathayom Sukda 2 student at his school.

The scandal was exposed in January this year when disgruntled local residents and members of the school committee released copies of Line chat messages found on the girl’s mobile phones.

In the messages, Mr Nathaphop addressed the girl as “darling’’ and “dear wife’’. Local residents also saw him out with the girl on several occasions.

Police have already laid charges of taking a minor away from her parents for obscene purposes, and defamation against him.