Rescued tourists are brought aboard a fishing boat, but the Phuket governor's office says "dozens of Chinese" are missing after their tourist boat capsized. (Photo Facebook)

The boat was carrying around 90 passengers when it began to keel over after it was hit by massive waves, prompting a rescue operation that stretched into the night and left authorities scrambling to react.

Collated reports at midnight said 53 people now are missing in the rough waters that overturned their boat.

The body of a man wearing a life jacket with the logo of the Phoenix boat was pulled from the sea. 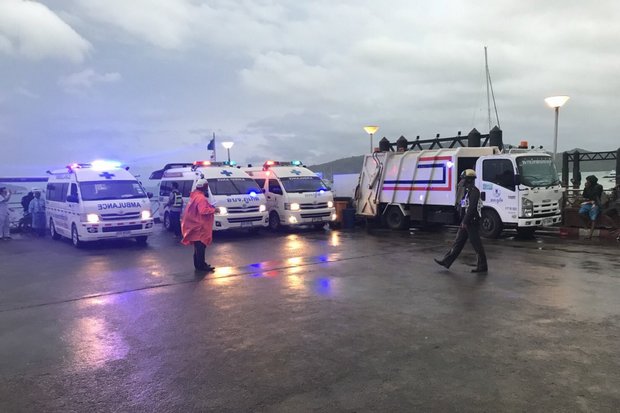 First responders stand by on the pier at Chalong, waiting for the rescue of tourists missing from the capsizing of their boat on Thursday. (Photo via Twitter/@fm91trafficpro)

The governor of Phuket, Noraphat Plodthong, said more half of the passengers were still "being helped" and unaccounted for as rescue and fishing boats rushed to the scene.

According to The Phuket News Gov Norraphat reported a total of 138 people in need of rescue from three incidents on the sea Thursday:

Television footage taken at a pier in Phuket showed stunned tourists huddling in blankets, while several women cried as medics tended to the injured.

The boat was returning to Phuket from Koh Racha at around 4pm when a storm hit, according to the captain, who identified himself as Somjing Boontham in a televised interview.

He said the boat was hit by 5-metre waves, which flooded the boat. It started to slowly keel over, prompting him to warn passengers to secure their life jackets and trigger inflatable life rafts. 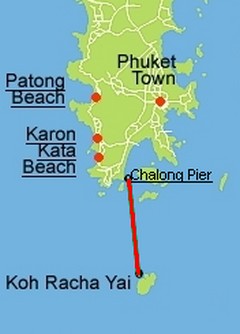 "So I sent someone to them to wear life jackets... They were all Chinese visitors -- apart from two farang," he said, adding around half the passengers were unaccounted for.

"There were high winds this evening," he said, adding a further 10 pleasure boats were stranded at sea and being attended to by rescue boats from the police and navy.

Others who made it to shore were covered in blankets and being tended to by medics at a pier in Phuket. Several women cried and shouted in Chinese.

Two other separate boat capsizes were reported in the same area Thursday evening.

All of the passengers in both cases were pulled from the sea alive.

Photographs circulating on social media showed soaked and exhausted passengers -- most of them Asian -- in life jackets being pulled on inflatable rafts to safety.

It was not immediately clear which boat they belonged to. 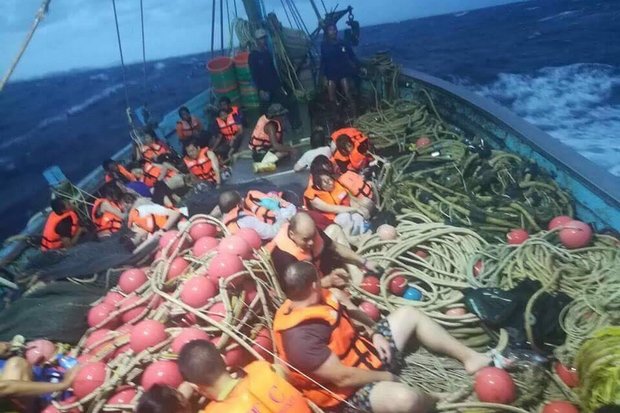 Rescued Chinese were taken aboard a Thai fishing boat to their original destination of Chalong on the southern end of Phuket. (Photo via Twitter/@Echinanews)