Tubes, skateboards and turbines are being suggested as possible ways to help get the 12 trapped boys and their football coach out of Tham Luang cave faster.

Many people have written in to the Bangkok Post suggesting their ideas.

Another writer, Roman Zitniak, suggested using turbines and strapping each boy to the body of a rescuer.

"A boy will be attached to the body of the rescuer (on their belly) and both will breathe from an oxygen tank attached to the back of rescuer. Two different oxygen masks will be used, with the boys having a choice of using a more comfortable full-faced mask if they are unable to use a standard one.

"The rescuer will use a small turbine, the same used in sea diving. Lights can also be attached to the turbine in order to help navigate in dark waters," he wrote.

If the divers can reach the children with rebreathers, rescuers must ensure simple built-in breathing systems can be installed.

"The immersion suits would alleviate any temperature or breathing issues. Even a panicked child would be secure," he wrote.

Brett Fitzgerald suggested using a tube to evacuate the children.

"If they made some tubes that were water tight and could fit a child in, they could pull the boys up by rope through the dangerous part of the submerged cave. It would save time as opposed to having to teach the kids how to use scuba gear," he wrote.

A similar idea was proposed by Arthur Willemse and Marc Thiadens.

"Is it not possible to put a flexible pipe in the cave till it reaches the boys? They can crawl through or/and be pulled by a rope. Just drive the pipe in the hole and, as it comes to the boys, pump out the water, or close it at the end before it goes in the hole," Mr Thiadens wrote. 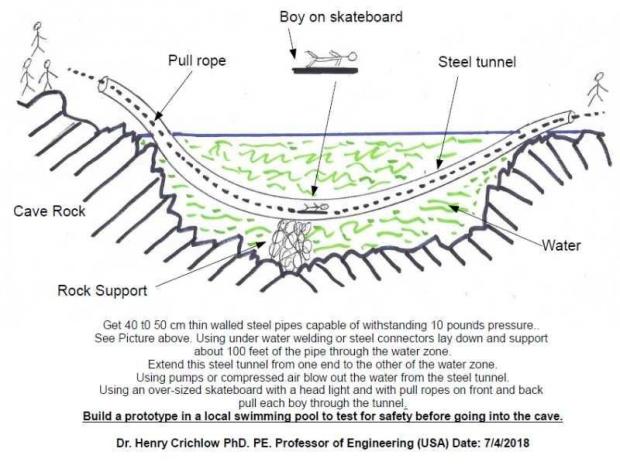 Henry Crichlow, a US-based engineering professor, provides an illustration of a rope-attached skateboard in a steel tunnel which he hypothesises could bring the boys out of the cave.

Henry Crichlow, a professional engineer, provided us with a drawing demonstrating transporting the boys on rope attached to a skateboard in a steel tunnel.

Phil Collett emphasised the importance of stopping the flow at places where flood water is going underground.

He and his friend suggested using mixed materials instead of rocks to build dams. "If it were me, I would consider using a mix of cement and bentonite dispersed in diesel, and pumping this into the upstream face. The bentonite will hydrate almost immediately on contact with fresh water and expand to fill and block flow paths," he said.

Even Tesla and SpaceX founder Elon Musk shared his thoughts on the matter. Responding to a query by Twitter user @MabzMagz, he wrote: "Boring Co has advanced ground penetrating radar and is pretty good at digging holes. Don't know if the pump rate is limited by electric power or pumps are too small. If so, could dropship fully charged powerpacks and pumps."

"I suspect that the Thai govt has this under control, but I'm happy to help if there is a way to do so," he added.