A navy ship brings the bodies of victims pulled from the sea to the shore in Phuket on Friday as the search resumes on Saturday. (Royal Thai Navy photo)

Divers found five bodies -- two boys, two men and one woman -- at around 11.30am on Saturday. The bodies were taken to HTMS Hua Hin ashore, Thai media reported. Another three bodies were retrieved in the afternoon.

Phuket governor Norapat Plodthong said earlier that all of the remaining missing people were expected to be found on Saturday. But authorities said later that the search would have to continue on Sunday and the perimeter would expand to the Phi Phi Islands in Krabi province.

The boat carrying holidaymakers, mostly Chinese, sank off the coast of Phuket during a violent storm on Thursday. Its captain on Saturday was charged with reckless conduct causing deaths and injuries.

Navy Seal divers, marine police and rescuers on board two naval ships -- HTMS Hua Hin and HTMS Panyee -- and a diving boat left a pier at Laem Panwa village in Muang district at around 10am on Saturday to the site, where the tour boat Phoenix capsized, about 1.5 nautical miles, or 2.8km off Koh Hae in tambon Rawai.

The Phoenix ran into trouble on Thursday afternoon, when it was hit by five-metre high waves. The boat, which had left the popular snorkelling site of Koh Racha for Phuket, was carrying 105 people, including crew and tour guides. Most of the passengers were Chinese tourists. Russians were also among them.

As of Saturday evening, 49 people had been rescued and 15 people were still missing. The death toll was 41, most of them Chinese nationals.

Despite fading hopes, divers would continue scouring the wreckage of the boat, which sank about 30-40 metres deep to the south of Koh Hae, to recover bodies. The boat will later be salvaged after all bodies are found.

More vessels, reinforced by a helicopter, were dispatched to join the search operation on Saturday.

The government of the eastern Chinese city of Haining in Zhejiang province said it received a distress alert sent by phone text message from the head of the Haining Haipai Furniture Co Ltd, from Thailand Friday morning.

It said that 37 of the furniture company's employees and family members had travelled together to Phuket and that on July 5 at around 5pm they encountered the "biggest storm in five years" and they sought the government's help. The group had booked their tours to the islands online on their own, said the posting.

A Chinese tour operator based in the central province of Hunan said on its official Sina Weibo account that three travellers it had booked were missing.

Lazy Cat Travel said it had sent personnel to Phuket to help out its clients, who also included 35 passengers who had to be rescued from another boat that it had chartered that ran into trouble on Thursday. It said that second boat had lost power after being swamped by waves. All on board were returned safely to shore.

Chinese President Xi Jinping, in a statement late Friday, urged the Thai government and agencies to "spare no efforts" in search and rescue and to provide proper medical treatment for the injured, the Xinhua news agency reported.

Mr Xi asked authorities to warn travel agencies and travellers against risks and help them take precautions during their holidays.

Chinese ambassador to Thailand Lyu Jian went to Phuket on Friday to give moral support to affected Chinese nationals and hold talks with Thai authorities about the rescue operation, identification of bodies and help for relatives of the dead victims.

China has sent two diving teams to join Thai divers and rescuers in the search operation, the ambassador told reporters.

Tourism and Sports Minister Weerasak Kowsurat said the government deeply regretted the losses of many lives and would make all-out rescue efforts to find the missing people. More than 800 rescuers were deployed in the search operation, said the minister.

The ambassador and Beijing thanked the Thai counterpart for the rescue efforts to help find the missing passengers and for providing measures to help the affected tourists.

Meanwhile, the Foreign Ministry has set up a special team to facilitate visa applications for families and relatives of the victims.

The Royal Thai Embassy in Beijing and the consulate in Shanghai are providing services for visa applications for the group even on weekends. They are eligible for an emergency visa that can be available within one day, ministry spokesperson Busadee Santipitaks said.

Visas on arrival at the Phuket airport will also be available for the group but they have to contact the Thai embassy or the consulate in China first. 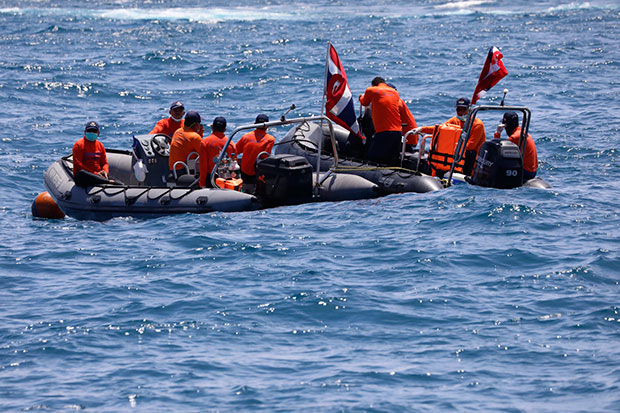 An inflatable craft carrying Chinese ambassador Lyu Jian heads for the site where the Phoenix went down.