Relatives of Chinese tourists who were on the ill-fated Phoenix gather at a hospital in Phuket. (Reuters Photo)

PHUKET: The family of a Chinese woman and her two children who were among the victims of a tourist boat disaster off Phuket are demanding "justice”, saying the tragedy was caused by human error and could have been avoided.

Their call came as police pressed charges on Saturday against the captains of two ill-fated tour boats that sank off the coast of the resort province, as the death toll from one of the sinkings reached 41. Fifteen people are still missing.

Chen Wei, a businesswoman from Chongqing, said videos and messages sent by her sister Chen De Qiong to the family's WeChat group just before the boat capsized on Thursday showed strong waves and passengers not wearing life vests.

The sister, Chen De Qiong, a 47-year-old doctor, arrived in Phuket on July 1 for a long-planned vacation with her 12-year-old son and 21-year-old daughter, Chen Wei said. 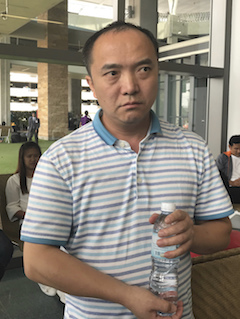 “I can hear the voice of my daughter screaming,” says Xing Yong, who lost three family members in the Phoenix sinking. (AP Photo)

The body of the daughter, Xing Yu Jie, was recovered on Friday. Chen Wei and her brother-in-law Xing Yong arrived in Phuket on Saturday afternoon after an overnight flight from Chongqing, and later identified the body of Chen De Qiong, which had been retrieved earlier in the day at a Phuket hospital. The son, Xing Hao Ran, was among the missing.

The tour boat Phoenix, carrying 105 people, capsized and sank on Thursday evening in a violent storm. Boats had been warned earlier in the day to stay ashore. Forty-one bodies had been recovered as of Saturday night, with 15 people still missing.

“I can hear the voice of my daughter screaming," Xing Yong said while transiting at Kuala Lumpur airport, as he showed the video to an Associated Press reporter. "You can see that nobody wore life jackets."

The short video clip, taken in a section of the boat's cabin, shows the boat tilting, with rough waves seen through the windows. A passenger tumbles down the aisle as belongings fall on the cabin floor, and a voice is heard shouting.

“It's shaking violently, and I'm feeling very dizzy," Chen De Qiong wrote to her family. "I want to go ashore immediately," she said in another message, saying her son was feeling ill.

Chen Wei said the boat company ignored warnings of bad weather and failed to take adequate measures to ensure passenger safety. She said the video showed that glass windows in the boat cabin were sealed but they should have had latches so that they can be opened to allow passengers to swim out in an emergency.

"Three out of a family with four members gone. How would you feel about it? Which family can bear such a blow?" she said.

"There are loopholes everywhere that caused this tragedy. ... I just want to seek justice for my family. This is not a natural disaster. This tragedy is man-made and could have been avoided.”

She said the vacation was planned as a celebration for her niece, who had just graduated from university, and her nephew, who is about to enter high school.

"When my niece was found yesterday, she had no life signs. Her passport helped identify her body," she said. "Our biggest hope is to find my sister and nephew."

Chen Wei had spoken to the AP on the plane. Upon arrival in Phuket, the family was ushered to the hospital, where Xing Yong identified the body of his wife through photographs.

Metha Limsakul, 58, captain of the Serenata, has been charged with reckless conduct causing physical and mental harm to others. His boat, carrying 39 passengers and two crew, capsized on Thursday but all aboard were rescued.

The two captains reported to police on Saturday to acknowledge the charges. The pair denied all charges and were later released, Thai media reported.

A committee has been set up to investigate the incidents and take action against those responsible. So far, police have questioned more than 50 witnesses.

Witnesses said the Meteorological Deartment had warned all boats against leaving shore on Thursday due to strong winds. However, the two boats defied the warning.