Rescue officials prepare to receive the boys and their coach as evacuation begins at Tham Luang cave in Mae Sai district, Chiang Rai, on Sunday. (Photo by Patipat Janthong)

Rescuers have begun an operation to bring the 12 trapped children and their football coach out of the Tham Luang caves.

"Today is D-day. The boys are ready to face any challenges," rescue chief Narongsak Osotthanakorn told reporters who were cleared from the cave entrance at mid-morning on Sunday. "We are at peak readiness."

Mr Narongsak said the boys and their coach, Ekkapol Chantawong are physically and mentally fit for the rescue bid.  Water levels at many spots in the cave are currently low, providing the best chance for the rescue to be carried out, he added.

Mr Narongsak said the evacuation decision was made after consultations with all concerned, including Seal members, the medical staff and families of the trapped persons.

He said the first rescued person is expected to be brought out of the cave by 9pm. 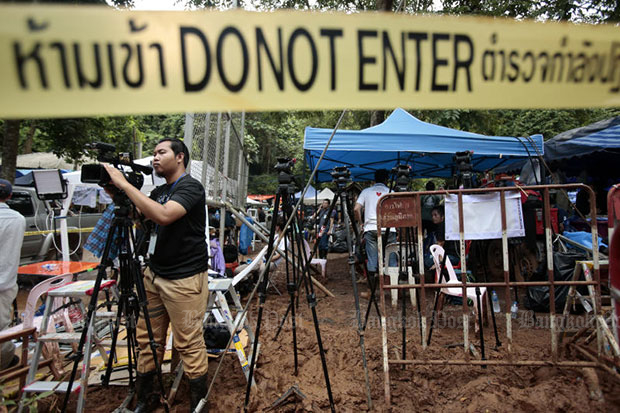 A source said the football team will be divided into four groups. The first group will have four people, while the second, third and fourth will have three people. Each boy will be closely escorted by two divers.

According to rescue authorities, 14-year-old Adul "Dul" Sam-on will be one of the first four kids to come out, while the coach will be the last.

very dangerous Thai cave rescue begins, this is the narrowest part of the cave. pic.twitter.com/Bzwk1dzi6U

Thai cave rescue: A doctor explains how it might affect the boys' health https://t.co/q8FymwuSQ4 pic.twitter.com/cMOGAbJTB4

This extraction of the 12 boys and their football coach won’t be an easy and quick one. Here’s our @ChannelNewsAsia AR graphics from a few days ago explaining the challenges to get the boys out of the #ThamLuang cave. https://t.co/nb4JwfgfUk

He added, Continue to be amazed by the bravery, resilience & tenacity of kids & diving team in Thailand. Human character at its best.

Got more great feedback from Thailand. Primary path is basically a tiny, kid-size submarine using the liquid oxygen transfer tube of Falcon rocket as hull. Light enough to be carried by 2 divers, small enough to get through narrow gaps. Extremely robust.

Continue to be amazed by the bravery, resilience & tenacity of kids & diving team in Thailand. Human character at its best.