Body found as search for missing tourists continues in Phuket

A Chinese rescue team arrives at Chalong pier in Phuket on Sunday to search for the missing Chinese tourists. (AP photo)

Rescuers are combing beaches and islands in the search for 14 people, most of them Chinese tourists, still missing after their boat sunk off the Phuket coast on Thursday.

Somnuek Prempramote, the Third Region Navy commander, said on Sunday the operation to locate the missing persons, most of them Chinese tourists, is being simultaneously conducted on land and at sea. The search areas are between Koh Yao and Koh Phi Phi in the Andaman Sea, he added.

The covered areas are in Phuket, Phangnga and Krabi.

VIDEO: Divers who helped recover bodies from a sunken boat in Phuket describe their experiences in one of Thailand's worst ever sea disasters pic.twitter.com/HMo4kzfHbR

The victims were among the 105 passengers and crew members on board the Phoenix dive boat that capsized in rough seas and a violent storm off Phuket on Thursday. So far, 49 people have been rescued while 42 bodies have been recovered.

The Marine Department will try to salvage the sunken boat, VAdm Somnuek added.

Phuket governor Norapat Plodthong said the latest body was found inside the wreckage of Phoenix and retrieved by divers.

Divers from China on Sunday joined the search for the missing, including conducting deep-sea diving, after receiving the green light from Thailand, the China Daily reported. 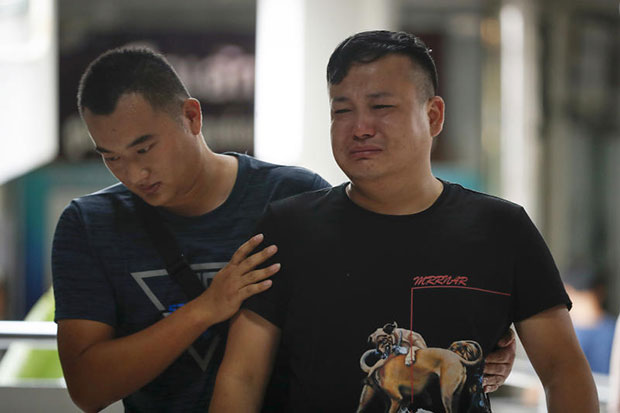 A Chinese relative of a victim in the recent boat sinking is consoled at Vachira Phuket Hospital on Sunday. (AP photo)

Chinese ambassador to Thailand Lyo Jian told a press briefing in Phuket that the search mission will not end until every missing person is found. He reiterated China's commitment to cooperation with Thailand on the operation.

Prime Minister Prayut Chan-o-cha will visit Phuket on Monday to follow up on the search operation before flying to Tham Luang cave in Chiang Rai.