The first four people made their way out through the flooded Tham Luang cave on Sunday evening, and were immediately airlifted to a hospital for medical treatment.

The first two emerged from the entrance of the cave shortly before 6pm.

One of the first boys to emerge from the labyrinthine cave network in Mae Sai district, Chiang Rai, was Mongkol Boonpiem, 13, according to sources. The name of the other was not immediately released.

They were airlifted by helicopter to Chiangrai Prachanukroh Hospital in Muang district.

The third boy came out of the cave at 7.15pm, sources in the operation said. Three others had reached Chamber 3, where they are receiving a medical check before rescuers take them the rest of the way out of the cave.

The Royal Thai Navy Seals confirmed later that three had been safely escorted out of the flooded cave. It added later that the fourth was brought out at 7.47pm.

That fourth person taken to hospital was the boys' football coach, Ekapol Chantawong, 25. He was said to be in one of the worst conditions because he had given the boys his share of the group’s meagre food supply before they were found. 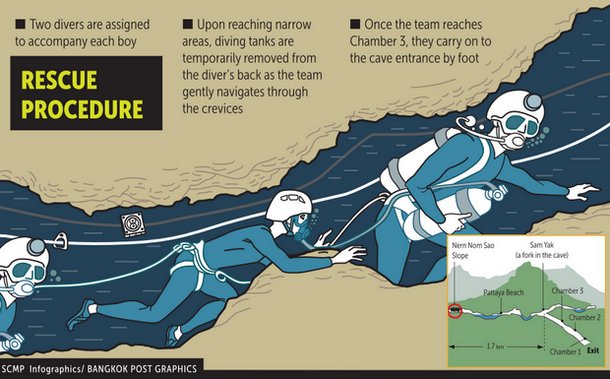 Reporters at Mae Sai and military sources earlier said that five boys had exited the cave. Other reports said that a sixth boy was about to emerge or may already have done so.

The first ambulances carrying the first two boys have arrived at Chiangrai Prachanukroh Hospital, where the boys will receive medical treatment. The third boy will soon be airlifted to the hospital.

A source said the rest of the group will be taken out in a later stage.

At 10am on Sunday, rescuers decided to bring the 13 out due to concerns that more rainfall could send more water into the cave. Rescuers earlier expected the first arrivals at the cave mouth at about 9pm.

All are members of the Mu Pa Academy Mae Sai football club. Twelve young footballers and their coach, Ekkapol Chantawong, entered the cave on June 23 and floodwater blocked their return, leading to one of the largest rescue operations in the history of the country.

BREAKING: Sky sources say a third boy is now almost out of the cave and fourth boy is also on route pic.twitter.com/zy1oqXX4Ar