Mae Sai students pause often, both formally and informally to pray and give good wishes for the safe return of their classmates stranded at the Tham Luang caves. (Photos by Wichan Charoenkiatpakul)

For the past 16 days, the pitch at Mae Sai Football Club in Chiang Rai has been eerily quiet as students have been fixated on the gruelling rescue operation to extract 12 team members and their coach from the flooded Tham Luang cave.

The AstroTurf ground serves as the main practice area for the Moo Pa (Wild Boars), a local U-16 club in this northwestern province that borders Myanmar and Laos.

Fourteen-year-old Puwadech "Bank" Kumngoen and Kittichoke "Tong" Konkaew, two members of the squad who did not join that fateful cave trip on June 23, said no one has felt like practising since their teammates vanished.

"Of course I want to play. I want to race down the pitch as soon as I can.

"This is World Cup time and I've been studying my favourite players to learn their techniques," Puwadech told the Bangkok Post.

"But I'm going to wait because I want to try those tricks on a real pitch with my friends," he added.

Kittichoke said the boys' team spirit is still strong but the long wait for news of their friends has been a draining experience.

"I love playing with my team and the perfect World Cup experience would be for us all to watch the final together," he said.

Eight of the boys had been extracted from the cave as of Monday, leaving four inside plus their 25-year-old coach. 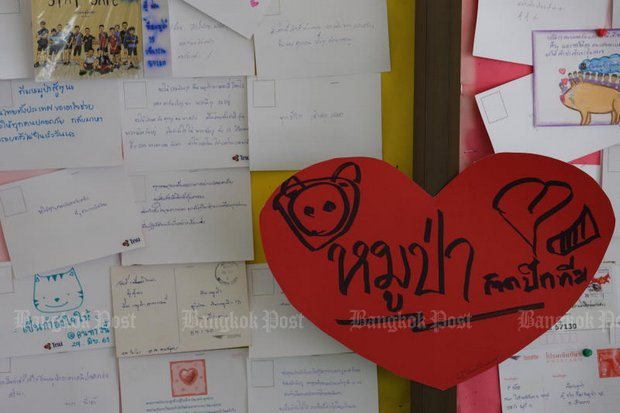 Postcards from across the country are pinned up on the board of the Pong Pha tambon administrative organisation office in Chiang Rai, conveying moral support for the trapped boys and their coach.

Puwadech said he was overjoyed at hearing the news on Sunday evening that the first four had been successfully rescued and were alive and well.

''I ran down from upstairs and jumped when the operation commander announced on TV that four of my friends had made it out safely. My whole family was so happy and we believe everyone will be okay.

"I knew deep inside they would make it because they're brave and strong," he said.

The two teenagers also attend Mae Sai Prasitsart, the same school as a handful of the trapped boys. They singled out 12-year-old Nuttawut "Tle" Takumsai as one of the most popular.

"All of our class loves Tle. He's a funny kid who always makes everyone crack up. We can't wait to have him back in class," said Puwadech.

"There are rumours going around that he was one of the first four brought out so we're all pretty excited but no one knows for sure yet," Kittichoke added.

Manutsanit Jongpunyanon, one of Nuttawut's teachers, said much of the dread that has taken over the students has now receded. Where they were sad and quiet before, they are now returning to their boisterous ways, she said.

"They were all thrilled at hearing the 13 trapped people had been found," she said. "Now they're over the moon at seeing four come out alive."

The teacher said she is now sure the rescue teams will be able to get all 13 members of the Wild Boar football team out safely, "because they are the best from around the world".

School director Kanet Pongsuwan said the six boys who study there would be exempted from taking an exam scheduled for next week and that all would receive counselling with a psychiatrist.

Other teachers will be trained on how to manage the boys' mental health, he said.

"Teachers and friends will be taught about how to talk to them sensitively and what to avoid saying," he added.