In the race to be the first to get their hands on news and photos of the operation to extract 12 boys and their coach from Tham Luang cave in Chiang Rai's Mae Sai district, some media crossed the line in their attempts to obtain information. The media gather for a briefing by rescue coordinator Narongsak Osottanakorn. But a photo of a media drone has brought down the wrath of the public. (Main photo by Wichan Charoenkiatpakul)

This led members of the public to slam the journalists responsible and question the ethics and professionalism of those channels, publications and portals.

On Sunday, two cases of media malpractice, in particular, infuriated the public: the use of a drone which interfered with a rescue helicopter and the interception of officers' radio communications.

One news outlet, in an attempt to capture photos of the first four boys rescued from the flooded cave, sent a drone flying near a helicopter that was used to evacuate the boys to a hospital in Chiang Rai. The operator of the drone claimed that he had asked for permission from an air force officer — a claim which the Royal Thai Air Force (RTAF) later denied.

The RTAF is coordinating with the Civil Aviation Authority of Thailand (CAAT) to probe the matter further. 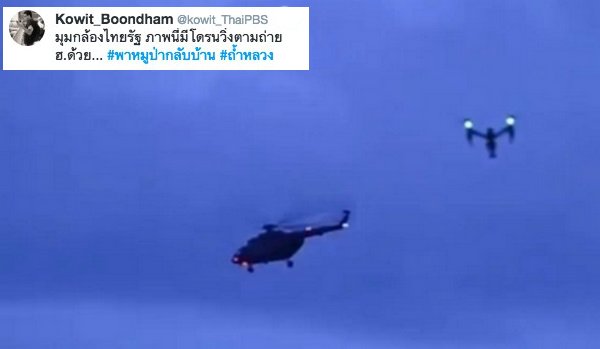 Another instance which generated uproar was when a TV news outlet broadcast a conversation between officers involved in the operation, obtained by intercepting their radios.

Pol Maj Gen Churat Pan-ngao, Provincial Police Region 5 deputy commander, who was overseeing the army of media at the cave, asked them on Monday to stop attempting to obtain information using such methods.

Pol Maj Gen Churat said if they continue doing so, he will consider whether their actions are illegal or not. If they are illegal, he will seek the prosecution of the accused media outlets.

"They must respect the officers and work in a way that does not interfere with either the operation or those involved. They must also respect the rights and privacy of individuals, especially the youths and their relatives," Mr Banyong said, referring to the latest media coverage at Tham Luang cave.

Furthermore, he said reporters need to be responsible not only to their media organisations but to Thai society as a whole, and should not focus solely on being the first to get information.

He added that in order to prevent the media from crossing the line, the owners and executives of each outlet need to set clear rules policies for their reporters to follow.

"The owners and executives of each outlet are responsible for keeping their employees in check. If such measures were in place, who would have violated those policies?

"Competition is normal, I know everybody wants to generate profit. But you don't need to be selfish to do so. The methodology needs to be right, not invade the rights of others."

Meanwhile, the TBJA also issued a statement emphasising that though the media might feel compelled to provide up-to-date information, they should heed professional ethics in news reporting, respect the rights of individuals and avoid reporting information that can affect the operation.

It also stated that at this time of public scrutiny, the Thai media should prove they can still work ethically.

As for questions about the sequence in which the boys are being rescued, Dr Boonruang Triruangworawat, Director-General of Ministry of Public Health's Department of Mental Health said the families had not questioned the plan at any stage.

Dr Boonruang said order had been determined by the physical condition of each boy, with those most in need of medical care being extracted first.