Seals of the navy's Underwater Demolition Team struggle through a muddy training course during the annual 120-hour Hell Week at the conclusion of their one-year brutal basic training. Cave diving is about to be added to the schedule. (File photo by Jetjaras na Ranong)

Skills unfamiliar to Thai Navy Seals but key to the successful rescue of the 13 "Wild Boars" extracted from Tham Luang cave will be added to the training regimen of the Navy's elite unit to better prepare them for unexpected situations.

The 17 days spent in the treacherous cave complex in Chiang Rai's Mae Sai district not only tested the Seals' strength, but has prompted them to think about arming themselves with the skills needed to navigate flooded, dark and murky passageways.

The 127 present and former "Seals" -- a nickname given to those attached to the Underwater Demolition Team (UDT) -- handled the risks and pressure at Tham Luang well, but they still needed to be guided by world-renowned cave divers who also joined the rescue operations.

"Many simply did not know what to do," when they first saw conditions inside the cave, Lt Cdr Khai Tochaiphum, a former Seal instructor who also joined the rescue mission, recalled, adding that none had cave-diving experience. Yet the rescue proceeded smoothly because it was so well-managed, he said.

Before the successful conclusion, the Seals and overseas rescuers were faced with decreasing oxygen levels and fears of further flooding triggered by downpours that have fallen on northern Thailand since last Wednesday. (Story continues below) 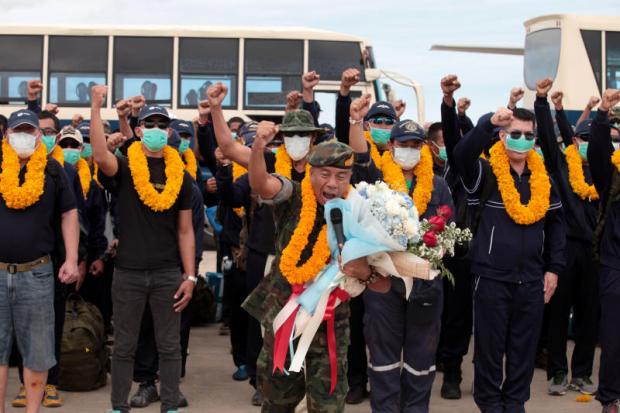 Naval Special Warfare Command chief Rear Adm Apakorn Yukongkaew, holding flowers, and the Navy Seals who took part in the rescue of the Wild Boars football team in Chiang Rai, raised their hands and yelled 'Hooyah. Hooyah. Hooyah' as they arrived at U-tapao airport in Rayong and were greeted by relatives and friends (below) before returning to their base in Sattahip district of Chon Buri. (Photos by Chanat Katanyu) 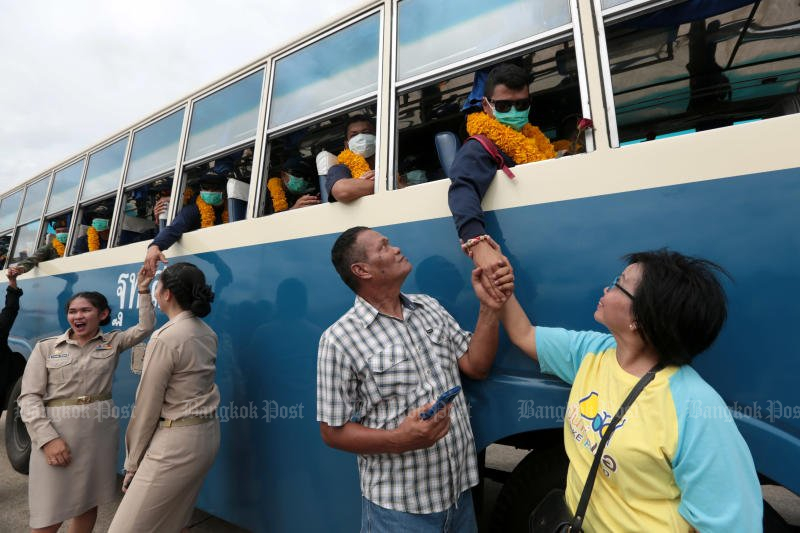 "We did better than expected. It's a victory," Royal Thai Fleet commander Adm Rangsarit Sattayanukun said as he welcomed the Seals and 32 Navy personnel at the Navy-owned U-Tapao airport in Rayong.

Adm Apakorn is renowned as a no-nonsense Seal chief.

He said yesterday he is courageous enough to encounter difficult situations and always expects his men to complete the jobs they are assigned.

"But there's one person I always listen to," he said, referring to his wife Sasiwimon.

"Her advice is useful and she has always been a morale booster for me."

Ms Sasiwimon worked behind the scenes during the Tham Luang rescue, liaising with experts from abroad and updating the Thai Navy Seal Facebook page which now attracts nearly 2 million followers.

"My wife has solid adventure experience," Adm Apakorn said of her previous trips to Mount Everest and Antarctica.

"The Navy believes it could be helpful and practical in future rescue efforts and will conduct further testing in Bangkok in the near future," read a tweet from a user called Than R, quoting Adm Apakorn.

SpaceX founder Elon Musk tweeted back he was "glad to hear that".