All 12 members of the Moo Paa (Wild Boar) soccer team and their coach pose with a drawing picture of Lieutenant Commander Samarn Gunan, a former Navy Seal diver who died working to rescue them. (Chiangrai Prachanukroh/ Public Health Ministry/Reuters photo)

The 12 boys and their coach rescued from a Thai cave mourned the death of an ex-Navy Seal who died while taking part in the mission, the Public Health Ministry said on Sunday.

The  Moo Paa (Wild Boar) football team are recovering in hospital following 18 days spent inside Tham Luang cave after entering on June 23 and getting trapped by monsoon floodwaters.

Doctors say they are in good health following a successful three-day operation which ended July 10 when teams of Navy Seals and international cave diving experts hauled the last five members of the team to safety.

But the lead-up to the final phase of the mission was met with tragedy when volunteer and Lieutenant Commander Saman Gunan, a former Seal member, died on July 6 while installing oxygen tanks along the twisting passageways of the cave.

Lieutenant Commander Saman was widely hailed as a hero but the boys, aged 11 to 16, were only told about his death on Saturday after a medical team said they were strong enough mentally to handle the news, though many wept after hearing it.

"All cried and expressed their condolences by writing messages on a drawing of Lieutenant Commander Saman and observed one minute of silence for him," Jedsada Chokdamrongsuk, permanent secretary for public health, said in the statement. 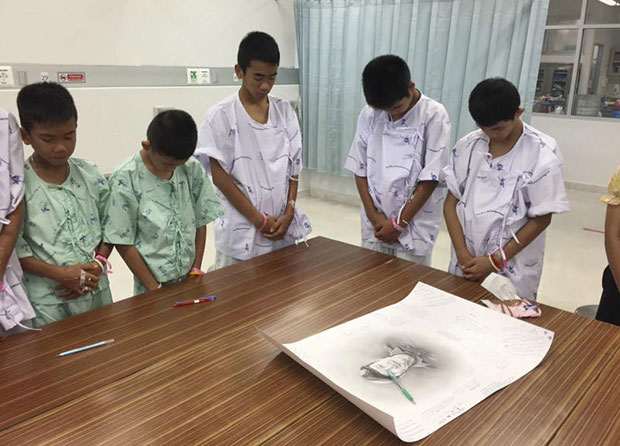 Photos released show the youngsters crowded around a sketch of Saman scrawling messages on it and bowing their heads in commemoration.

"They also thanked him and promised to be good boys," the statement said.