More than 1.2 billion children, or 53% of young people worldwide, are at risk of being robbed of their childhoods by poverty, conflicts and discrimination against girls, according to Save the Children.

Around 537 million of those children at risk live in countries facing two or more threats, such as India which is plagued by poverty and discrimination against girls, the UK-based group says in its annual report.

Moreover, almost 153 million children are living in 20 countries affected by all three threats, including Afghanistan, South Sudan and Somalia.

Overall conditions for children appear more favourable than they were a year ago in 95 of 175 countries. However, conditions worsened in 40 countries, the 2018 "End of Childhood Report" shows.

About one billion children live in countries plagued by poverty and face a higher risk of death before the age of five, poor health, malnutrition, exclusion from education, child labour, early marriage, giving birth while they are still children themselves, and extreme violence. The UN Convention on the Rights of the Child defines a child as someone under the age of 18.

In Thailand, the poorest children are nearly 10 times as likely to die by the age of five as the wealthiest children. The country ranks 85th on the index of the best and worst countries for children to grow up in, although its score improved by 11 points, from 852 to 863, due primarily to improved nutrition, the report noted.

Kim Koch, country director of Save the Children in Thailand, said the report reveals that progress is being made in Thailand, but not quickly enough. Alarmingly, the gap between rich and poor in many countries including Thailand is also growing.

"Ethnic minorities, migrant children, pregnant girls, and children living with poverty are still missing out on their childhood because of childhood-ending discrimination," she said. "This includes being excluded from education, having to work or get married, early pregnancy and extreme violence."

Thirty percent of children from ethnic minority groups in Thailand cannot read by the second grade -- compared with 1% in Bangkok. Approximately 225,000 migrant children are currently out of school, and 4.4% of pregnant adolescents are at risk of having their education interrupted, according to the report.

Although Thailand has reached the UN Sustainable Development Goal target of 25 or fewer deaths per 1,000 live births at the national level, children born into the poorest families are nearly 10 times as likely to die by age 5 as those from the wealthiest families.

"This disparity in Thailand is really concerning, and it's a big reason why Save the Children is campaigning for inclusivity, to ensure all children in Thailand can access basic services such as healthcare and education, regardless of their background, ethnicity or circumstances," Ms Koch said. 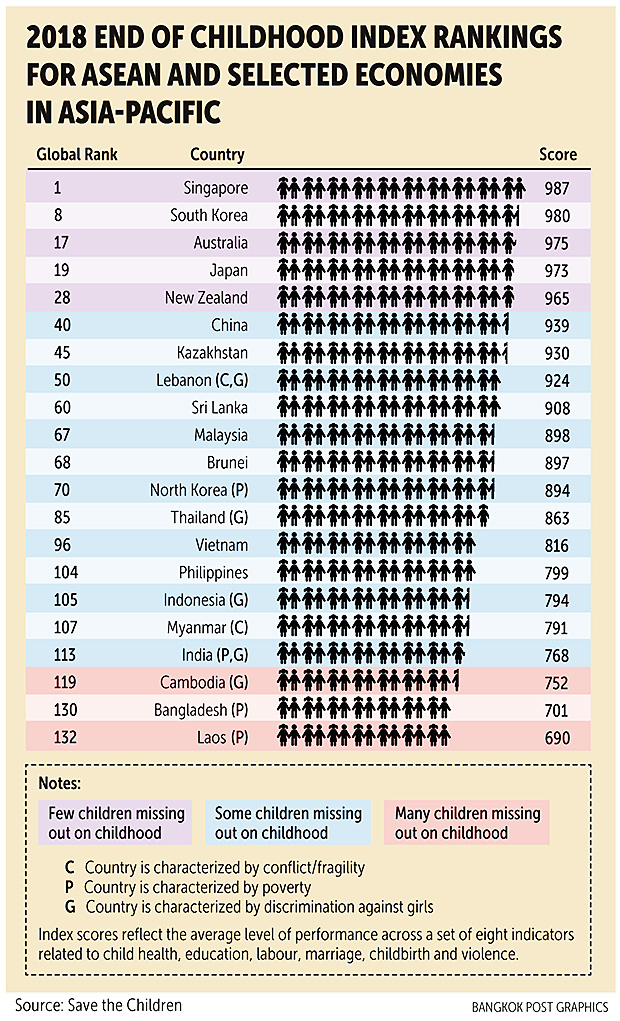 Similar to last year, the report positions Thailand in the top half of its overall rankings, ahead of neighbours including Vietnam (96), the Philippines (104), Indonesia (105), Myanmar (107), Cambodia (119) and Laos (132). Significantly, though, Thailand is singled out as a place where discrimination against girls is high.

Singapore and Slovenia both rank first worldwide, with Norway, Sweden and Finland rounding out the top five. Eight of the bottom 10 countries are in West and Central Africa, with Niger ranked last.

Despite their economic, military and technological might, the United States (36th), Russia (37th) and China (40th) trail all Western European countries in the index. In East Asia and the Pacific, 76% of countries made progress, but the Philippines saw a decline due to higher levels of malnutrition causing stunted growth.

In South Asia, four of eight countries improved their scores. Bangladesh made the most progress, raising its score 21 points, from 680 to 701, mostly by getting more children into school. India's reduced rate of child marriage helped increase its score by 14 points, from 754 to 768. Afghanistan's score fell 10 points, from 602 to 592, because of conflict-related displacement and children out of school.

In East Asia and the Pacific, 16 of 21 countries made progress. China increased its score 11 points, from 928 to 939, mostly by improving enrollment rates and nutritional status of children.

One finding from the report notes that at least 240 million children live in countries affected by conflict and fragility. Malnutrition, disease and inadequate healthcare now kill over 20 times as many children as conflict-related violence in war zones. 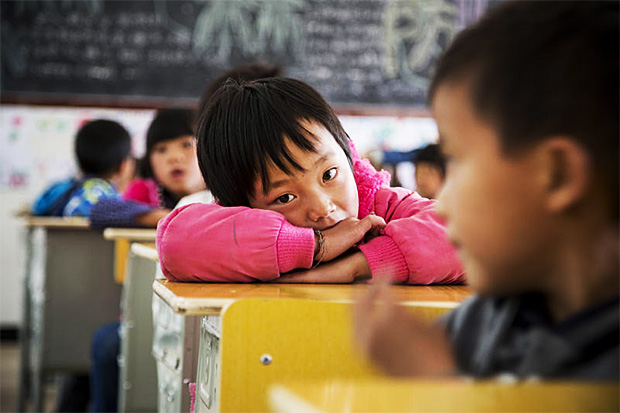 A boy studies in a classroom at Fuheng Primary School in Yangbi county in China’s Yunnan province. Photos: Save the Children

"Suffering violence, witnessing violence or fearing violence can cause lifelong disabilities and deep emotional trauma," the report said. Separation from family members and economic hardship can expose girls and boys to exploitation in the forms of child labour, child marriage, sexual violence and recruitment into use by armed groups, it added.

The incidence of child labour in countries affected by armed conflict is 77% higher than the global average. The report highlights the case of an 11-year-old Lebanese boy named Sultan who left school before he learned to read and write in order to work and support his mother and three sisters.

He goes out every day to sell packs of chewing gum and boxes of tissues. He doesn't return home before he has secured the US$5 his family needs, even if that means staying on the street until midnight.

Only two Asian countries, Afghanistan and Myanmar, are characterised by conflict but Sultan's story is no different from that of youngsters from Myanmar, Cambodia and Thailand who beg or sell garlands and knick-knacks on the streets in Bangkok, Phnom Penh or Yangon.

"I think children work because they have to, because they are poor, and [adults] make them do it. Children don't like to work, and it's not normal to have children work," Resul, a Roma boy displaced from Kosovo to Montenegro, is quoted as saying in the report.

Conflict also makes girls more vulnerable to child marriage. Only four of 34 fragile or conflict-affected states have achieved, or nearly achieved, universal primary education. The poorest girls have about three times as many births as the wealthiest.

The less visible dangers for children in conflict are caused by lack of food and the collapse of essential services such as healthcare, sanitation and education, the report notes.

The major causes of death in these settings are largely preventable and treatable: pneumonia, diarrhoeal diseases, malaria and measles. These illnesses claim more children's lives because the healthcare and nutritious food that could save them is unavailable or out of reach due to insecurity. In conflict settings, the risks to mothers and newborns can also multiply due to lack of skilled care, medicines and unsanitary conditions. 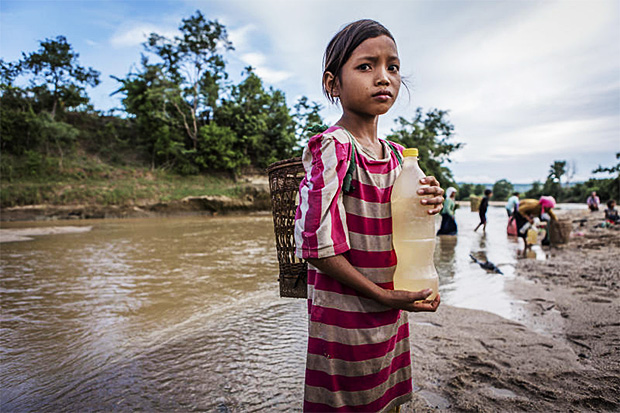 Like many children her age, 11-yearold Dinh has to collect drinking water from a river in Vietnam.

According to the Oslo-based Peace Research Institute, the most dangerous countries for children in conflict are: Afghanistan, Nigeria, Somalia, Syria and Yemen.

Another serious problem is that 575 million girls are now living in countries characterised by discrimination against girls, which often places them at heightened risk of death before the age of five, being denied education, forced into early marriage, and/or giving birth before they are emotionally and physically ready.

Fifty-five of the 185 countries in the End of Childhood Index are characterised by discrimination against girls. In Asia, they include North Korea, Thailand, Tajikistan, Indonesia, India, Cambodia, Nepal, Pakistan and Afghanistan.

The report highlights the case of a 15-year-old girl named Lucky in Bangladesh, ranked 130th on the index and characterised by poverty: "We were very poor -- sometimes we would eat every two or three days. Even though my parents really wanted all three of their daughters to study, it wasn't possible, so they got me married," she said.

Complications during pregnancy and childbirth are the number one killer of girls aged 15-19 worldwide, and 12 million girls marry each year before they reach age 18.

Boys face exclusion too, for example, they have much higher rates of homicide than girls, and are more likely to be involved in hazardous work. Most countries characterised by conflict are also characterised by discrimination against girls (23 of 34). There are over 85 million girls living in these countries, the report says.

Save the Children has recommended that governments in countries characterised by conflict, poverty or discrimination against girls invest in children, ensuring all are treated equally, regardless of who they are or where they are from.

Save the Children recommends that countries and donors invest in achieving gender equality by ensuring girls are able to complete their education, including those who may have been forced to leave school because they are married or pregnant, and that they are safe from sexual and gender-based violence.

Governments, meanwhile, should raise the legal age of marriage to 18, close legal loopholes and address harmful norms that leave girls vulnerable to child marriage and other forms of gender-based violence.

Other recommendations include investments in "girl-sensitive" education programmes to ensure more refugee girls go to and stay in school, and to improve refugee girls' access to education by removing economic barriers, through initiatives such as scholarships, free access and transport.

Top 10 trends that require urgent action, according to Save the Children: