Vehicles involved in the pileup are seen after the collision on the Mitraparp Highway just after midnight on Wednesday morning. (Photos by Prasit Tangprasert)

NAKHON RATCHASIMA: A violent collision involving three passenger vans, a pickup and an oil truck killed six people and injured many others at a U-turn on the Mitraparp Highway in tambon Makluea Mai of Sung Noen district early Wednesday.

Police were informed of the accident at about 12.50am. It happened on the Bangkok-bound side of the main northeastern highway near Soong-nern Kijvaree Ice Plant Ltd.

It was reported that six people were killed instantly and 11 others were injured. Rescuers had to use hydraulic tools to retrieve bodies and the injured, who were rushed to Sung Noen Hospital.

Gas was leaking during the rescue mission.

Police said while the oil truck was making a U-turn, the three vans and the pickup truck were unable to slow down and collided in a chain reaction series of rear-end crashes.

Two of those killed were the drivers of the first two vans that hit the oil truck. The four others were passengers on the second van.

Pol Lt Col Trakan Saksrikrom, inspector-general at the Sung Noen police station, identified the oil truck driver as Udonsak Srinil, 36. The man waited for police at the crash scene. Police did not find any trace of alcohol or drugs in his system.

The truck driver was charged with reckless driving causing death and property damage, he said. 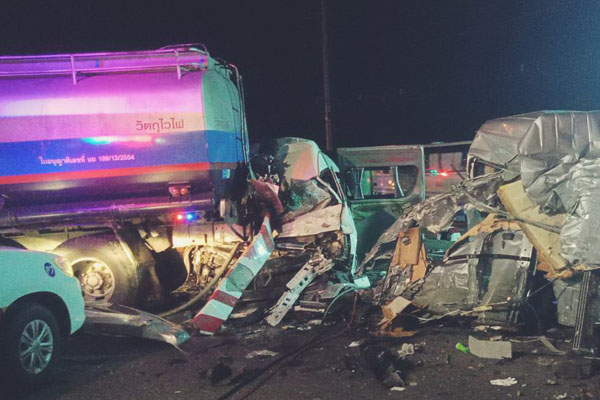