Thai armed forces told to get ready to help Laos

Rescue workers in Nakhon Ratchasima province prepare their gear before leaving for Laos to support rescue missions in response to a hydropower dam collapse. (Photo by Prasit Tangprasert)

Deputy Prime Minister and Defence Minister Prawit Wongsuwan has ordered the armed forces to prepare themselves so they can act readily when Lao authorities approach Thailand for assistance in the rescue after a dam collapsed in the neighbouring country.

"Military attaches have been communicating with each other and the Foreign Ministry has been coordinating with us to assess the situation so we can act as soon as the Laos government makes contact," Lt Gen Kongcheep said.

Gen Prawit also ordered the Royal Thai Armed Forces Headquarters to set up a special operations room to handle the planned assistance. Besides, the air force prepared its Wing 21 in Ubon Ratchathani province to supply assistance to Pakse airport of Laos, he said.

In Nakhon Ratchasima province Tuesday night, a team of about 30 local rescuers, paramedics and divers left for Attapeu province of Laos where the dam is located. They brought along rescue gear including jet skis and boats.

The team, which had earlier worked at Tham Luang cave in Chiang Rai province, wants to help rescue flood victims in the Lao province.

The Armed Forces Development Command said later Wednesday that it was preparing a relief convoy of supplies and personnel to help the victims, including assistance from His Majesty the King.

The Vientiane government was initially preparing help from its own local resources but would later accept external aid, including food, clothing, drinking water, medicine and money, through the Thai embassy in Laos.

PM’s Office Minister Kobsak Pootrakul said the government was ready to offer comprehensive assistance to Laos such as consumer goods, medical treatment and the rehabilitation of deluge-damaged areas.

The Foreign Ministry had asked Laos what was needed most and the government was likely to conclude the assistance list soon, he said. 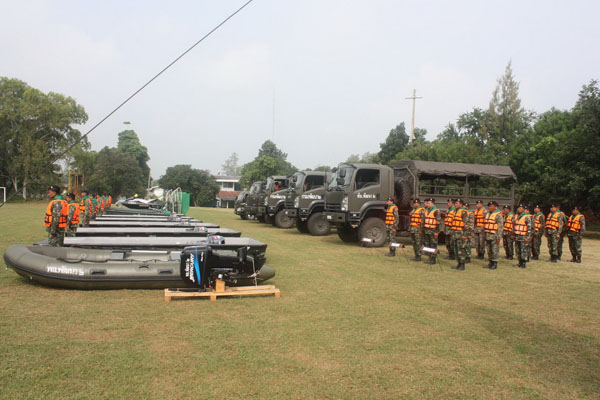