The use of 3D magnetic ink is among the new security elements incorporated in the two denominations of a new series of banknotes put into circulation on Friday to mark His Majesty the King’s 66th birthday on July 28, the Bank of Thailand (BOT) announced.

The 500-baht  and 1,000-baht notes are printed with Optically Variable Magnetic Ink (OVMI) to improve security and prevent counterfeiting. They are part of the new Series 17 banknotes.  (see photo below)

The BoT announcement said use of OVMI produces three dimensional effects when looked at from different angles and combine with other features that make them easy to identify and create unreproducible effects.

The front of both banknotes feature a portrait of His Majesty the King dressed in a Royal Thai Air Force uniform.

The back of the 500-baht banknote features a portrait of King Prajadhipok (King Rama VII) and King Ananda Mahidol (King Rama VIII) as the main picture.

The main picture on the back of the 1,000-baht banknote is a portrait of King Bhumibol Adulyadej (King Rama IX), along with a portrait of HM the King.

Small squares can also be noticed on the 500-baht note, and circles can be seen on the 1,000-baht note. Their colours switch between gold and green.

The public can obtain the new series banknotes from commercial banks and financial institutions from today onwards.

The BOT said the printing of the Series 17 notes was approved by the King in March and the first series of new banknotes featuring His Majesty in three denominations -- 20, 50 and 100 baht -- were launched on Chakri Memorial Day, April 6. 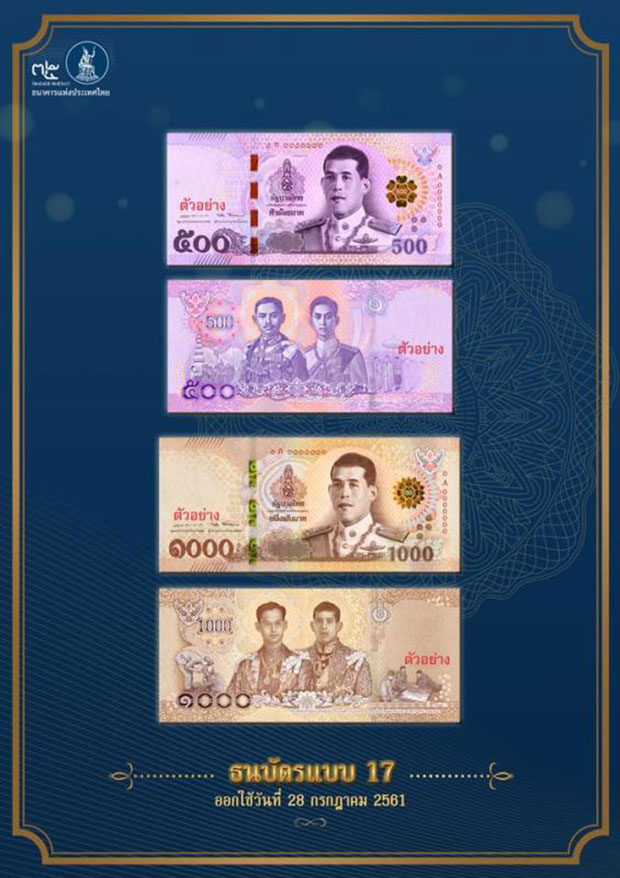