SURAT THANI: Twenty-five passengers were hurt when a Bangkok-Nakhon Si Thammarat interprovincial bus crashed into a road barrier and overturned in a downtown area of this southern province on Saturday morning.

The crash occurred ahead of the construction site of a bridge over Bang Kung intersection, said police, who were reported at around 6.30am.

Bus driver Sombat Duangmat, 49, told police that the bus, carrying 45 passengers, left Bangkok at 10.40pm on Friday for Nakhon Si Thammarat. On the way, it had rained along the southern route from Chumphon province, said the driver. The bus belonged to Nakhon Si Romyen Tour Co.

He insisted he drove slowly with caution, but the vehicle suddenly veered off the slippery road to hit a roadside concrete barrier and overturned.

The force of the crash injured 25 passengers, 15 of whom were women. Most of them were hurt slightly and taken to a nearby hospital. 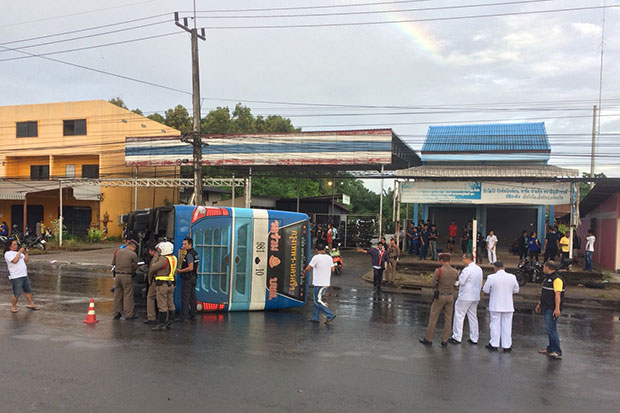