PHETCHABURI: Residents in Muang district are scrambling to put up sandbags and build concrete barriers to brace for floods which could happen Monday or Tuesday from the Kaeng Krachan Dam spillover, while authorities are racing to reduce the impact from possible flooding. 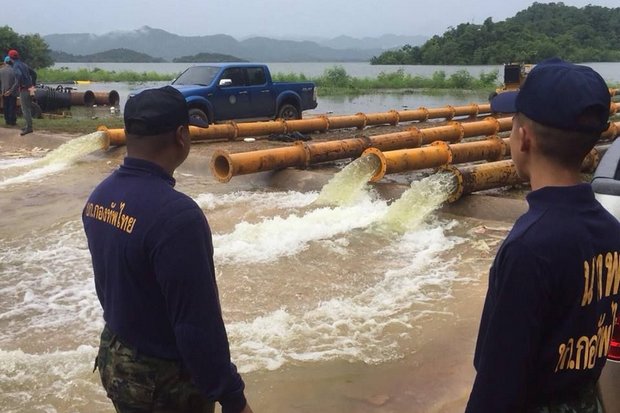 Officials of the Royal Irrigation Depatment are rushing more pumps and equipment to the Kaeng Krachan Dam to try to pump catchment water into fields. (Photo via Kaeng Krachan National Park)

As the amount of the dam's inflow was more than that of outflow, it is expected that the water would cross over its spillway at 10pm last night, he said.

However, he affirmed the spill would not cause damage to the dam as the volume of the spillover would not rise too rapidly.

"It could take more than 12 hours before the spillover reaches Phetchaburi Dam, and it would take another 20 hours for the dam's surplus to reach Muang district," Mr Thongplew said.

Hundreds of people were seen at Muang Phetchaburi municipality from Saturday night receiving sacks and filling them with sand as they planned to put sandbags in front of their houses to fend off floodwater.

Municipality officer Nualchan Charoenying said each resident can get 25 bags, but they need to fill the bags themselves.

A command centre has been set up at Phetchaburi City Hall to cope with the situation with necessary equipment, including water pumping machines and boats, sent to the site in preparation for the deluge. 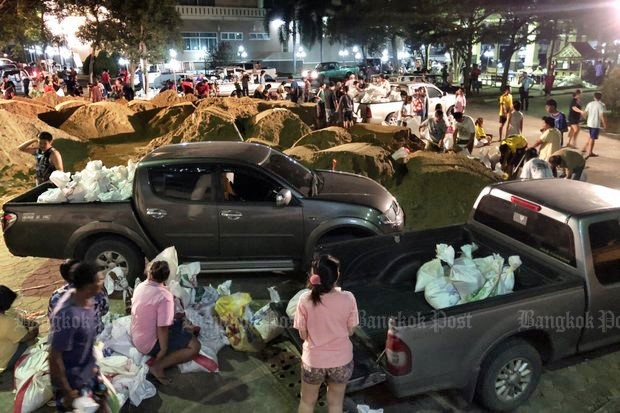 Late Saturday night and all day Sunday, residents of the main Phetchaburi town were picking up and filling sandbags - 20 per household. (Post Today photo)

Mr Thongplew said the dam spillover at the rate of 10 cu m per second would raise the Phetchaburi River by 10-15cm, which would swamp low-lying areas.

Residents downstream of the dam were urged to be vigilant about the situation and move their belonging to higher ground, he said, adding floods may affect Kang Krachan, Tha Yang, Ban Lat, Muang and Ban Laem districts.

He stressed children and the elderly should first evacuate out of the areas.

Suthan Ritkab, of the Phetchaburi office of agriculture and cooperatives, said Phetchaburi River flows through Muang district at a rate of 150 cu m per second and irrigation channels in the district are capable of draining 50 cu m of water per second.

The Kaeng Krachan Dam currently releases water at the rate of 120 cu m per second, which means the spillover of above 80 cu m per second would inundate both sides of the river in the district.

Somkiat Prajamwong, secretary-general of the Office of the National Water Resources (ONWR), said the impending flood could last two weeks before it recedes, except in low-lying areas where floods could last up to two months.

Work is currently under way to prepare for possible inundation across the province.

At the provincial city hall, disaster prevention and mitigation officers in Phetchaburi and Prachuap Khiri Khan brought in heavy machinery and other equipment to prepare for the possible deluge.

A water pump with a capacity of draining 28,000 litres of water a minute has been installed at Phra Chom Klao Hospital in Muang district of Phetchaburi.

Anuban Sasima School and Pariyat School in Muang district are suspending activities for two days to enable parents to prepare for the possible inundation.

In Kaeng Krachan district, officers and volunteers were sent to help residents to move their belongings to higher ground and put sandbags along river banks to cope with the overflow as rains continue upstream of the dam, according to observers.

In Ban Laem district, deputy Phetchaburi governor Nattawut Petpromsorn led officers to survey an irrigation canal in tambon Pak Talay ahead of its dredging, as overflow from Phetchaburi River could be diverted into the canal.

Meanwhile, volunteers helped clear weeds in Tha Rang canal in tambon Tha Rang to make sure the water drains out to the sea as quickly as possible.

In Ban Mai Bon of tambon Bang Krok, volunteers reinforce the earth embankment along Phetchaburi River in a bid to prevent the overflow.

The boats will be stationed in the final section of the river to ensure water is pushed out to sea quickly. The navy has also sent 70 personnel to assist in the task.

Two major dams in Kanchanaburi are set to discharge more water, as both dams will exceed their maximum capacity soon.

Pairat Thapprasert, acting director of the 13th Irrigation Office, wrote to the provincial governor to notify about the plan to discharge more water downstream, which is needed to make room in the two dams to receive more rainwater over the next two or three months.

Increased discharge would cause the Mae Klong River to rise and people living in the low-lying areas downstream could be affected, it says.