Water started overflowing down the spillway at Kaeng Krachan dam on Monday, bringing warnings of flooding 20-70 centimetres deep in the middle region of Phetchaburi province from Tuesday evening.

Efforts were being made to divert water before it reached the dam and minimise the overflow. Flooding around the centre of Phetchaburi should be capped at 50cm deep, Gen Chatchai said. Flood levels at low-lying areas of the province could be deeper.

The deputy prime minister said he was concerned that the southwest monsoon might bring more rain in the next few days.

Somkiat Prajamwong, secretary-general of the Office of the National Water Resources, said overflow from Kaeng Krachan dam into the Phetchaburi River would start to flood central Phetchaburi on Tuesday evening. Flooding would begin at 20-30cm deep and could rise to 50-70cm. This was about the same as last year, he said. (continues below)

If there was more rain, the rate of overflow down the spillway of the Kaeng Krachan dam could rise to 250-300 cubic metres per second, but water would not overflow the crest of the dam, which was seven metres above the spillway, Mr Somkiat said. 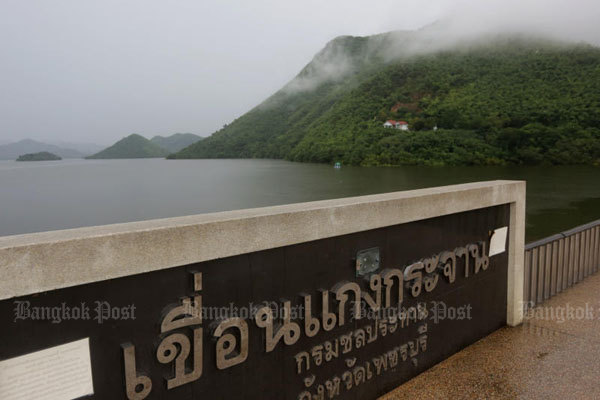 The full reservoir of the Kaeng Krachan dam on Monday