Sandbags are everywhere in front of homes and businesses like this bank, as Phetchaburi residents try to protect their property from the flood expected to hit the two late Tuesday. (Photo by Wichan Charoenkiatpakul)

As people in Phetchaburi brace for devastating floods tonight at around 10pm, after a massive volume of water was released from a major dam to the Phetchaburi River, residents were using sandbags and even cement to wall off the front of their homes and businesses Monday so as not to be inundated.

These do-it-yourself embankments have become in vogue as residents fear the damage that will follow if the Kaeng Krachan dam overflows as predicted. It was close to capacity as of Monday evening, with much of the water having flowed in from Myanmar.

The Royal Irrigation Department (RID) has warned it could receive significantly more rainfall until Thursday.

Prime Minister Prayut Chan-o-cha is due to visit the province Wednesday for an inspection tour to assess the damage wrought by the overflowing dam and check up on water-management plans.

"Many areas might need to have an evacuation plan in place," Gen Prayut told reporters. "Any homes downstream must be prepared to evacuate to higher ground," he added.

He reportedly cancelled a planned trip to Lop Buri to inspect the Pasak Jolasid dam there as this was considered more of a priority. 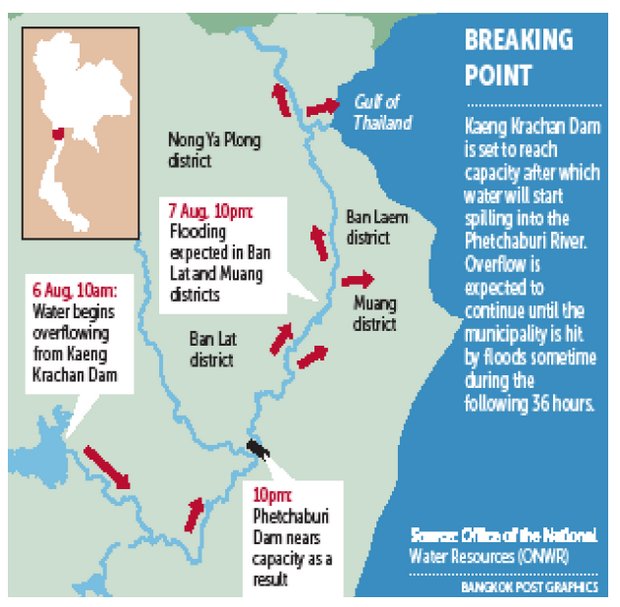 After Gen Prayut leaves Phetchaburi he is due to visit Nakhon Phanom, Mukdahan and Bung Kan -- three northeastern provinces affected by overflow from the Mekong River.

Since late last week, the RID and the provincial governor have urged residents in the province's central and neighbouring districts to prepare for water levels of up to 50 centimetres on the streets and possibly invading their homes.

Provincial authorities have been handing out sandbags since late last week. Many of the residents have been building knee-high embankments, according to reports.

Construction worker Ari Sridokbua was busy laying bricks in front of a townhouse on busy Phong Suriya Road. She told the Bangkok Post that 14 houses in the municipality had hired her to build similar cement walls to safeguard their properties.

Nonetheless, locals appeared surprisingly calm ahead of the coming floods. Several people interviewed by the Post said they had not moved their belongings to higher ground despite a notice from the authorities to store them at heights of 80cm or more.

"I will do it when the water flows in," said one elderly woman who lives on the central thoroughfare but who declined to give her name.

On the streets of the city it was business as usual.

"I'm not that worried. We'll handle whatever Mother Nature throws at us," said Rungsub Thammapongsiri, a 64-year-old fruit stall owner whose shop is situated next to a bridge over the Phetchaburi River.

Ms Rungsub said she has experienced many floods and could sense the district was about to get swamped -- again. With water levels raging last night in the Phetchaburi River, which is directly connected to the dam, fears are mounting that it could unleash a violent stream of water.

"Nobody wants it to happen. But it's caused by the force of nature so what can you do?" she said.

Floods have become an accepted part of life in Phetchaburi after having pounded the province for the past three years. In November, eight districts and 30,000 families were affected, with 12,000 rai of farmland inundated and crops destroyed.

The province is vulnerable to floods because the Phetchaburi River and its tributaries link to the dam and a large reservoir and the area is low-lying.

Rising seawater from the Gulf of Thailand also makes it harder to drain out floodwater out during the six-month rainy season, according to Anond Snidvongs, a climate change expert and director of the Geo-Informatics and Space Technology Development Agency (Gistda).

Mr Anond warned the province is likely to get hit by floods this month and again in November as erratic and severe rainfall in neighbouring Myanmar is filling local dams to capacity.

"History has taught us that the second round of floods is usually worse than the first," he said.

The government is developing more infrastructure to improve its flood-drainage system as well as diverting canals. However this takes time. It took two years for local authorities to complete a flood control channel, for example.

Not everyone was convinced that the province would suffer a significant impact, however, with Deputy Prime Minister Chatchai Sarikulya dismissing reports that spillover from the Kaeng Krachan dam would trigger mass flooding.

Yet he conceded that water levels could reach 50cm, with some low-lying areas at risk of being submerged.

He also countered criticism that the government has failed in its objective of discharging water properly to preempt more flooding.

"The administration has followed the proper criteria," he said. "Any excessive discharges from the dam could lead to a drought later."

Deputy PM Chatchai was more concerned about the rain coming Thailand's way from the southwesterly monsoon. It is expected to hit the western part of the country within a few days.

The army was mobilising personnel and equipment including trucks, flat-bottomed boats, field cooking kits, 8,000 sandbags, a medical team and about 300 troops tasked with building flood barriers along the river.

The navy has brought 20 water-propelling boats and 70 personnel to the province while the air force has deployed 30 personnel as well as trucks, flat-bottomed boats and pumping machines. The RID said there are now 13 water pumps in place and 12 sets of water-siphoning equipment.

Outflow from the dam hit 300 million cu/m per second on Monday, the RID said.