CHON BURI: The accused gunman in the murder of a young couple at Buddha Mountain has told police a Phuket nightclub operator opened fire first, using two pistols, then he followed suit by firing seven shots at the pair.

Narong Warintharawet, 22, implicated nightclub operator Panya Yingdung, who remains at large, in the murder of Paweena Namuangrak, 20, and her boyfriend Anantachai Jitram, 21, in the parking lot at Khao Chee Chan (Buddha Mountain) in Sattahip on July 29.

Mr Panya, the alleged mastermind, is believed to have fled to Cambodia.

Narong and another suspect Kritsana Sisuk, 22, turned themselves in separately to local police in Nakhon Si Thammarat on Monday night and were then taken to Sattahip police station in Chon Buri and charged.  Mr Kritsana was earlier taken for a crime re-enactment on Tuesday.

During the re-enactment, Mr Narong told police that he, Mr Kritsana and Mr Sayant accompanied Mr Panya to Buddha Mountain that day. They were in a car driven by Mr Kritsana and were following the young couple. 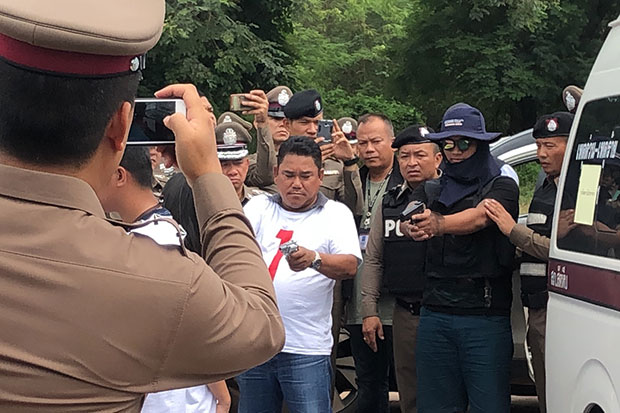 An officer in a white T-shirt poses as the alleged mastermind carrying two handguns at the crime re-enactment at Khao Chee Chan in Sattahip district, Chon Buri. (Photo by Chaiyot Pupattanapong)

At the parking lot, Mr Panya got out of the car carrying two handguns, according to Mr Narong, who followed behind. Mr Panya walked towards Ms Paweena and suddenly opened fire at her with both guns, the suspect said.

Mr Narong admitted that he then fired three shots at Anantachai and four shots at Paweena.

They then fled in two cars, one driven by Mr Kritsana and the other by Mr Jirasak. Only Mr Panya remains at large.

Cambodian authorities have been asked to catch and hand over Mr Panya, reported to be hiding in a village not far from the border.

Jealousy was believed to  be the motive for the murders. Paweena worked for Mr Panya and was reported to have been his favourite.